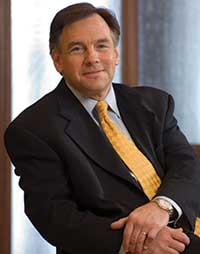 Jim Frey has spent the 35 years since he graduated giving back to the community in various ways. When he accepted the position of chair of the Saint John's University Board of Regents in 2007, he did so as a way of giving back to a school that he said shaped him. "I wouldn't be where I am today unless I had been a student at Saint John's," says Frey.

Frey led the board through many challenges-defining and strengthening SJU's relationships with both CSB and Saint John's Abbey, guiding SJU through enrollment and fundraising challenges associated with the economic downturn, and leading the first presidential search in almost two decades after the passing of Br. Dietrich Reinhart '71, OSB. Frey, a former attorney, offered good counsel and sound decision making. As chair, he saw the university through the completion of the capital campaign One Generation to the Next.

Frey's love of Saint John's runs deep. Several members of the last three generations of the families of both Jim and his wife, Mary (White) Frey '80, have attended CSB and SJU including their son, Peter '08. Jim Frey is now president and CEO of the Frey Foundation of Minnesota. The Frey Foundation has been a generous supporter of Saint John's, particularly of The Saint John's Bible and the FirstGen initiative to enable first-generation college students to attend SJU.

Frey has served on many boards with a focus on education, homelessness and philanthropy. He currently is vice chair of Heading Home Minnesota and is a board member of the National Catholic Reporter.

J. Michael Dady '70 noted that awarding Jim Frey the Reger Award "will put broad smiles on the members of the Saint John's community everywhere, including, I like to think, from above, with Father Walter Reger smiling his approval down on all of us," he said.