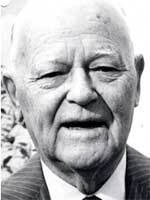 Henry Borgerding first came to college in 1903 on a three-day trip across Stearns County by train and buggy from his home in Belgrade.  He became a top student and later a close friend of Fr. Walter Reger.  Henry emulated the monk's ideals of dedicated service to others.  He was a life-long resident of Belgrade and its mayor.  Henry remained active in SJU and civic affairs throughout his life.