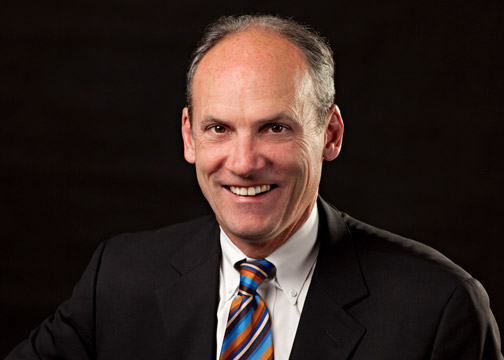 When Dan McKeown ’85 looks at the other names who have received the Fr. Walter Reger Distinguished Alumnus Award over the years, the CEO/President of Specialty Mfg. Co. in St. Paul, Minnesota is deeply humbled to join that group.

McKeown served as chair of the Saint John’s University Board of Trustees until January. His work in that capacity helped pave the way for the creation and implementation of a new governance structure for SJU and the College of Saint Benedict, including the move to common boards and a single president.

In recognition of those efforts, and of his decades of accomplishments as a student, alumnus, trustee and advocate for the school, he has been named this year’s recipient of the award – the highest honor bestowed by the SJU Alumni Association for service.

The award is named in honor of Fr. Walter Reger, OSB. A priest, professor, prefect, dean and friend, he was the driving force behind the Saint John’s University Alumni Association for years. He had ties to thousands of Johnnies, corresponding with many of them long into their alumni years. So ardent was his dedication that he became known as “Mr. Saint John’s.”

McKeown will receive the honor as part of Saint John’s Day activities on April 22.

Dan McKeown served on the SJU Board of Trustees from 2013 to earlier this year, and again followed in his father’s footsteps when he became chair – a role in which Tom McKeown had served from 1989 to 1992.

“I am deeply humbled and honored to receive this award,” McKeown said. “I look at the distinguished alumni who have received this and it’s overwhelming to me to be selected. I didn’t know Fr. Walter, but I know many of the names on this list and how committed they are to Saint John's.

“I hope in my small way, I have done enough to be honored by this award. As a son of Tom McKeown, who gave an enormous amount of his time over these past 50 years to this university, I’m honored to be the second father-son recipient. I attended his event in 1993 and was deeply honored by the commitment of he and my fellow alums who put in untold time and energy to support Saint John’s and our students.”

“Dan is the quintessential Johnnie,” Culligan said. “Over the years, he’s been very active in alumni events, he sent his daughter to Saint Ben’s and his son to Saint John’s and he rose to the highest level by becoming chair of the Board of Trustees.

“His love for Saint John’s and Saint Ben’s runs deep. He’s been an uber volunteer and he has done incredible things for the colleges by helping to advance Strong Integration. We owe a deep gratitude to both Dan and his wife Heidi for their amazing service and generosity to the two schools.”

Culligan said he first met McKeown in 1983, and even then he could see his deep connection and devotion to SJU ran.

“He was a student here and I had recently graduated and was working in admissions,” Culligan recalls. “We both took a nighttime class learning how to use a computer. It was an old VAX system. Neither one of us were computer geniuses and we sat next to each other and laughed about our ineptitude.

“Some of the things that were evident even when he was a student were the strong family ties he had to Saint John’s and Saint Ben’s (his brother and sister, who are twins, were classmates of mine), his love of the place and a real intellectual curiosity, as well as a great sense of humor and a penchant for fun.”

McKeown said he has chosen to remain so connected to SJU over the years because of the sense of place he found there.

“It came from the living in dorms with my classmates, the shared goals of being a teammate in cross country and track and field,” he said. “It was founded in commitment, excellence and support of each other and the daily call to prayers as the bell tolled in the Abbey Church.

“I came to Saint John’s for the education and received an excellent one. But I learned much more than a degree. I developed a desire to continuously learn, listen and seek more. And the final thing I took away, was a sense of balance between the intellectual pursuit, athletic success and physical health and the care for the spirit through faith and prayer. I have tried to live my life balancing these areas and I began to understand the need for that balance as a senior at Saint John’s.”