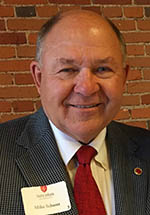 The driving force in Mike Scherer’s life can be summed up by four letters that loom high above the Saint John’s University campus.

“If you look at the collar on the Quad, there are four letters – IOGD,” said Scherer, referring to the Latin stone inscription embedded atop the building’s west wall.

“Have you ever noticed those?” he said. “They stand for ‘Do All Things for the Glory of God.’ It’s not about glorifying yourself.

“That’s something that always stuck with me,” Scherer said, “those four letters.”

That’s also a major reason why Scherer ’67 is this year’s recipient of the Fr. Walter Reger Distinguished Alumnus Award, the highest honor bestowed by the Alumni Association for service to the Saint John’s community.

“He’s got the heart of a champion when it comes to Saint John’s,” said SJU trustee Jim Sexton ’81, who nominated Scherer for the award. “He’s an amazing guy, a true friend and dedicated trustee of the university.”

“Saint John’s just had a big influence on my life,” said Scherer, who has served SJU in a variety of capacities since his graduation 50 years ago. “I’ll call it the Rules of Saint Benedict – hospitality, giving back, service to other people.”

Scherer will receive the award during the 2017 Reunion Rally at 10:30 a.m. Saturday, June 24 at Saint John’s Stephen B. Humphrey Auditorium. The celebration will be followed by a picnic lunch. Register online or call Leila Utsch at 320-363-3654.

Scherer’s ability to take a long-lens, holistic view and advocate university needs has been invaluable to Saint John’s during his decades of postgraduate service.

He has provided exceptional leadership during his nine years as a Saint John’s Trustee and Chair of the Buildings and Grounds Committee. Scherer helped facilitate completion of major capital projects including the Alcuin Library Renovation, Br. Dietrich Reinhart Learning Commons and the Saint John’s Athletic Complex.

Scherer and his wife Susie have supported every SJU capital campaign on the leadership level, and they have provided ongoing support for Bahamian students and their families.

“God doesn’t put us here just to see how much we can get ourselves,” Scherer said. “It’s how much we give back to other people.

“It’s something that’s made my life enjoyable, doing that.”

Along with his dedicated service to Saint John’s, Scherer provided tremendous business leadership as Chief Operating Officer and board member of Scherer Bros. Lumber Company. He also shared his skills and leadership in many other community roles, including his church, education, economic empowerment and senior living.

The Reger Award is named after the long-time secretary of the Saint John’s Alumni Association. Known as “Mr. Saint John’s,” Fr. Walter, OSB, was a dean, history professor, prefect, member of the university orchestra and purveyor of Johnnie Bread.

He befriended hundreds of Saint John’s students and maintained personal correspondence with them after they graduated. Fr. Walter died in 1971, and the Alumni Association Board of Directors launched the award program later that year. The award’s first recipient was Fred Hughes ’31.

Scherer is a fitting addition to that legacy.

“Mike is one of those guys who has lived the Johnnie spirit throughout his life,” Sexton said.

“Saint John’s is not just monks and brick and mortar – it’s the alumni,” Scherer said. “All of us that have graduated from there – we are Saint John’s.

“Saint John’s is our mother. We are sons of that. And good sons take care of their mother.”