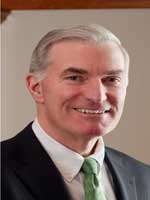 John Agee "worked his way up the ranks" as a Saint John's alumnus volunteer. He first served as a class agent in the late 1970s to the '90s. John spent seven years in a leadership position with the Alumni Association, beginning a three-year term on the Board of Directors in 1988 and then serving as president from 1990-91 and alumni representative to the SJU Board of Regents the following year. Beginning in 1995, he has had two stints as a Regent. Throughout, John was an active career network mentor and fund-raiser.