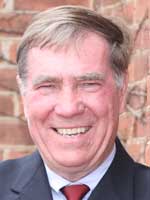 The Alumni Association Board of Directors selected Dave Wendt '63 as the 2008 Walter Reger Distinguished Alumnus in recognition of nearly four decades of loyal service to alma mater.