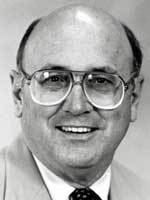 Tom McKeown worked for Fr. Walter as SJU's public information director in the late 1950s. He became president of the Twin Cities Chapter in 1964 and Alumni Association Board president from 1965-66.  Upon moving to Massachusetts, he helped lead the Boston Chapter through the 1970s.  Tom was on the University Board of Regents 1986-92. He chaired the Board from 1989-92 and led various capital campaign committees over the years.