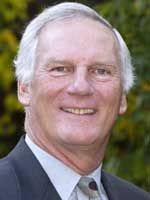 The Alumni Association Board of Directors have selected Bob Spinner '64 as the recipient of the 2009 Walter Reger Distinguished Alumnus Award in recognition of many years of loyal service to his alma mater.

Throughout his life, Spinner has remained connected to the Saint John's community. He has served as chair of the Board of Regents and is currently a member of the National Campaign Committee.

In addition, Bob and his wife, Patti, continue to generously support the university.  They established The Robert and Patti Spinner Family Endowed Scholarship in December 2003.

Following graduation from Saint John's, Spinner earned an M.A. in hospital and healthcare administration from the University of Minnesota and launched a career in the healthcare industry.  He spent 33 years with Allina Hospitals & Clinics and its predecessor organizations in various capacities, serving as president and CEO of Abbott Northwestern Hospital for 10 years.  He retired in 2001 as president of Allina Hospitals and Clinics.

"When it comes to classmates and alumni of Saint John's who have impacted my life, the list goes on forever. Saint John's friends are like an extended family that just continues to grow," Spinner commented.