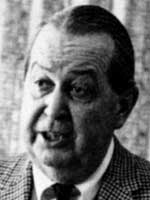 Cleve Cram had a distinct look and a distinct role in , D.C., Chapter.  The dignified gentleman held posts for the CIA, internationally as well as in the nation's capital.  It was there that he was a mentor and friend to dozens of fledgling Johnnies working in the federal government.  Cleve also had more formal leadership positions in SJU fund raising drives in the region and was his class agent.  He attended after a visit to the family farm in 1934 by Fr. Walter Reger and Fred Hughes '31.