The 16th firing of the Johanna Kiln at The Saint John’s Pottery will honor three artists who have been pivotal in the international wood-firing community.

When the kiln is lit at 4 p.m. Friday, Oct. 7, it will commemorate the efforts of Koie Ryoji, Chuck Hindes and Paul Krueger, all of whom have been closely associated with the studio and died since the last lighting in 2019.

Ryoji, a renowned Japanese ceramicist, was known internationally for his experimental approach to clay and was a frequent studio guest at Saint John’s University. Hindes built the ceramics program at the University of Iowa, is celebrated across the U.S. for helping integrate wood firing into academia and has left a creative legacy in his students – many of whom will participate in the kiln firing at SJU. And Krueger, a former Johnnies assistant wrestling coach, became close friends with master potter Richard Bresnahan. They collaborated on numerous pieces, with Krueger providing intricately designed and knotted reed handles for Bresnahan’s teapots and ceremonial cake platters, many of which are in public and private collections.

“These artists were dynamic, highly creative individuals who had a profound influence on the world of wood-firing and a deep and lasting impact on our community,” said Bresnahan, director at The Saint John’s Pottery and artist-in-residence at SJU. “Their work lives on in the vibrant community that gathers to ceremonially light and fire this kiln.” 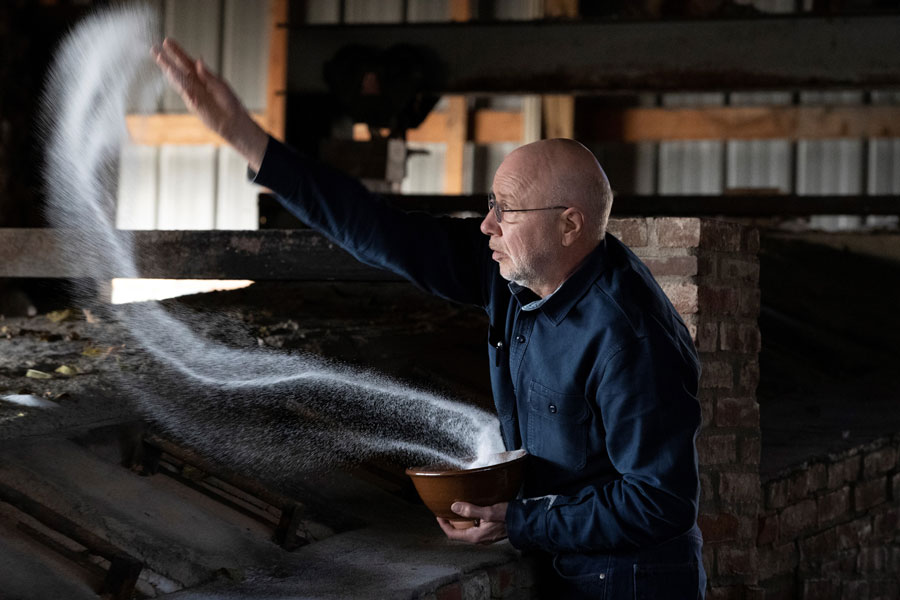 Richard Bresnahan tosses salt during the lighting ceremony of the 15th firing of the Johanna Kiln in 2019. Photograph by Nate Jorgensen.

Kiln is largest in North America

The kiln, named in honor of Sister Johanna Becker, OSB, was designed by Bresnahan and built by apprentices and volunteers and fired for the first time in 1995. The largest wood-burning kiln in North America, it can fire up to 12,000 works of pottery and sculpture and takes as many as nine weeks to load. Once the doors are closed, the lighting ceremony begins when hundreds of individuals from the Saint John’s community – monks, laypersons and guests – gather for a short prayer. The kiln area is ritually purified in Japanese tradition with rice, salt and sake, and then lit with a handmade torch.

For 10 consecutive days, 60 volunteers gather at SJU to make the firing possible. Many stoke wood in shifts that stretch around the clock. The public is invited to attend the firing, which will continue through Oct. 16. On completion, the kiln is sealed with recycled clay to slowly cool for two weeks. Finally, it is opened, and the ceramics are carefully unloaded, cleaned, and prepared for everyday use.

For CSB junior Mahina Melim ’24, the firing is an important step in her education. She is the schools’ first environmental art intern, studying ways to reduce and apply waste reduction strategies in the studio. Her internship at The Saint John’s Pottery gives her direct insight into the loading process of the kiln, in which studio staff and apprentices use locally sourced and renewable materials such as wild rice hulls in place of more common industrial processes.

“I enjoy watching the loading process in real time, and the careful thought and consideration that goes into where each piece is placed and positioned in the kiln,” said Melim, who is majoring in environmental studies and minoring in studio art and has loaded the kiln along with apprentices Daniel Smith and Luke Kiefer. “The interaction of the flame with the various pieces feels almost like a lovely metaphor for how our interactions with nature as human beings leave a unique mark.”

Firing in memory of Ryoji, Hindes and Krueger

The kiln had special meaning for Ryoji, who developed a long relationship with Bresnahan. Ryoji was born in 1938 in Tokoname, Japan, and the fallout of nuclear weapons used to bring World War II to an end had a lasting impact on his art. He died on Aug. 6, 2020, the 75th anniversary of the bombing of Hiroshima.

Hindes, born in 1942 in Muskegon, Michigan, studied at the University of Illinois and the Rhode Island School of Design. He lectured throughout the United States and Canada and received grants from the National Endowment for the Arts. Hindes died November 22, 2021, and some of his final pieces will be fired alongside works of his former students in the Johanna Kiln.

Krueger was born in 1946 in Chicago. Originally a mathematician before entering the Navy, his experience in the Vietnam War set him on a path to becoming an artist. He produced knotting designs for the Buckminster Fuller Institute and was an assistant wrestling coach in the 1980s and early ‘90s at SJU. Krueger, who lived in Long Pond, Pennsylvania, died on Feb. 12.

“What’s important about these three artists is how their work confronts history,” Bresnahan said. “Their impact will extend across generations, and to collaborate with an artist like Paul over the course of 42 years is a wholly unique relationship within the world of ceramics and ceramics history.”

In memory of the artists, the studio will display three sculptural papier-mâché boats, created by Evan Czajkowski ’22 with contributions by Andy Juelich ’06, at the firing.

“Evan’s studies in both the computer science and art departments speak to the incredible possibilities of the liberal arts experience at CSB and SJU,” said Steven Lemke, associate director at The Saint John’s Pottery and environmental artist-in-residence, who taught Czajkowski in ART 116 (3D design/drawing) and mentored him as a work-study employee. “His interests began in programming and grew to include art and design. His work across these disciplines, and their synthesis here at The Saint John’s Pottery, set him up for continued success. And it’s just one way that illustrates how our students graduate ready to address the world’s challenges through creativity and ingenuity.”

Melim said the internship is at the intersection of her passions in environmentalism and art and offers the opportunity to engage in interdisciplinary research on-campus.

“I am very grateful to the CSB and SJU community, specifically people like Professor Lemke, who has gone out of his way to help turn a simple interest into an opportunity to learn in and experience a setting that others might never have the chance to,” she said. “In my three years as a student here, I’ve learned that there are so many resources available and so many individuals willing to lend support.”

Founded in 1979, The Saint John’s Pottery engages artists, students and the public in the work of artistic creation in relationship to the natural environment. It provides environmental art education to College of Saint Benedict and Saint John’s students, post-baccalaureate apprenticeship programming to prepare early-career artists for life in the arts, and the Mary Livingston Griggs and Mary Griggs Burke Foundation Japanese Artist Exchange Fellowship. Paul Krueger created the reed handle for Richard Bresnahan’s Gourd Teapot in 2009. The piece was fired in the front chamber of the Johanna Kiln at SJU. Photograph by Peter Lee.