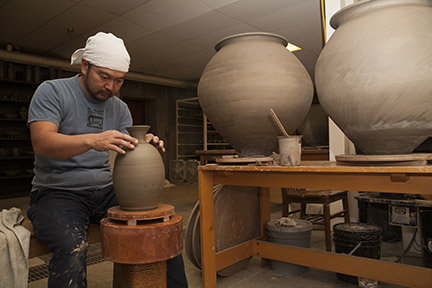 The Mary Griggs Burke Fellowship for Japanese Artists and Apprentices created a new research and study endowment to provide opportunities for artists interested in furthering Japanese visual culture.  This establishes the Saint John's Pottery as a regional center for exchange with Japan, enabling it to host artists from the country which has grounded its work since 1979.

Central to this legacy in Minnesota is Mary Griggs Burke.  Born in 1916, Burke was the daughter of Theodore W. Griggs and Mary Steele Livingston.  She earned a bachelor's degree in 1938 from Sarah Lawrence College, where she studied literature and painting.  Afterward, she earned a master's in clinical psychology from Columbia.  Burke amassed the most comprehensive private collection of Japanese art outside Japan, and was a pioneer of nature conservation in both countries.  In 1987, Burke was awarded Japan's prestigious Order of the Sacred Treasure.  Upon her passing in 2012, her collection was given principally to the Minneapolis Institute of Art and the Metropolitan Museum of Art.

Burke's connection to Bresnahan stretches back to the time of his apprenticeship in Japan, where he worked with a 13th generation National Living Treasure pottery family.  Following an extended tour and conversation with Burke about his work, Bresnahan, then 23, received notice of a surprise gift: a special research grant allowing him to further his time in Japan, awarded to him by the foundation in recognition of his efforts.

"Mary was interested in the study of Japanese ceramics in all its forms," Bresnahan said.  "Her first gift in support of my early work sustained me during my apprenticeship abroad, and is just one of countless examples in which she passionately supported artists and researchers worldwide.  With this new endowment, we will ensure that her generosity and commitment extends across generations."