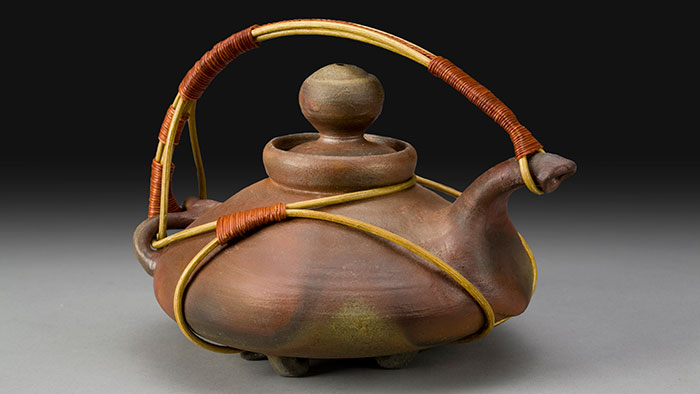 For over 30 years, Richard Bresnahan and The Saint John's Pottery have collaborated with photographers, sculptors, printmakers, architects, engineers, videographers, writers, and naturalists. An early example in Bresnahan's work is a long-term collaboration to create woven teapot handles.

Bresnahan began working with Krueger as a way to create durable and functional non-ceramic handles. Krueger is interested in knotting designs that allow for the engineering of maximum stability with the minimum amount of material. The plant fiber offers flexibility in working and natural harmony with the wood-fired ceramic surface.

The technique Krueger uses to craft his handles was acquired from the fiber medium of Marlingspike knotting. This medium derives its name from a sailor's awl used to tie complex knots. Each handle is unique to each ceramic object as part of a conversation between two materials–rattan and clay–as well as a conversation between friends.

In addition to the work of Paul Krueger, a selection of recent collaborations at The Saint John's Pottery include: residencies with visiting artists from Japan; an interdisciplinary collaboration on kiln firing research; an outdoor installation of woodfired sculptures; a public bronze on the Saint John's campus; and a series of small book readings held at the studio.