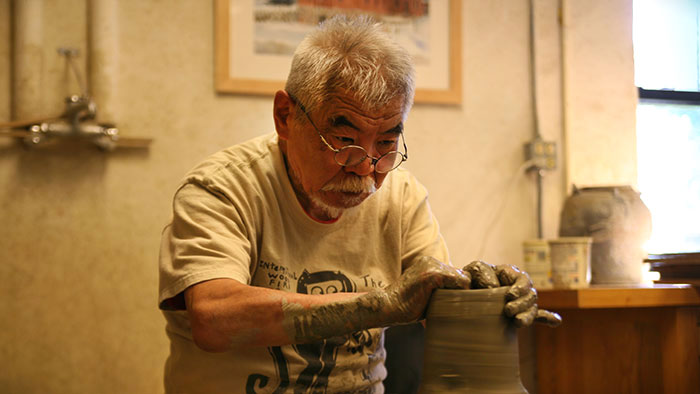 Japanese ceramicist Koie Ryoji visited The Saint John's Pottery in 2008 to create work alongside Richard Bresnahan and his current and former apprentices. Known for his sponteneity and improvisation at the wheel, Ryoji used Saint John's Clay to make his pieces, which were later fired in the Johanna Kiln.

Ryoji and Bresnahan have worked together in this way for many years. Former apprentice Samuel Johnson had previously worked in Japan as a guest of Ryoji, and during that time they constructed a wood kiln. In a similar exchange, former apprentice Anne Meyer had also worked closely with Ryoji during her travels to Japan.

During Ryoji's visit to The Saint John's Pottery, Samuel Johnson brought his CSB/SJU ceramics students to observe Ryoji and his assitants working in the studio. As Bresnahan worked alongside Ryoji while translating between English and Japanese, Johnson's students experienced an incredible opportunity to observe a Japanese master at work.