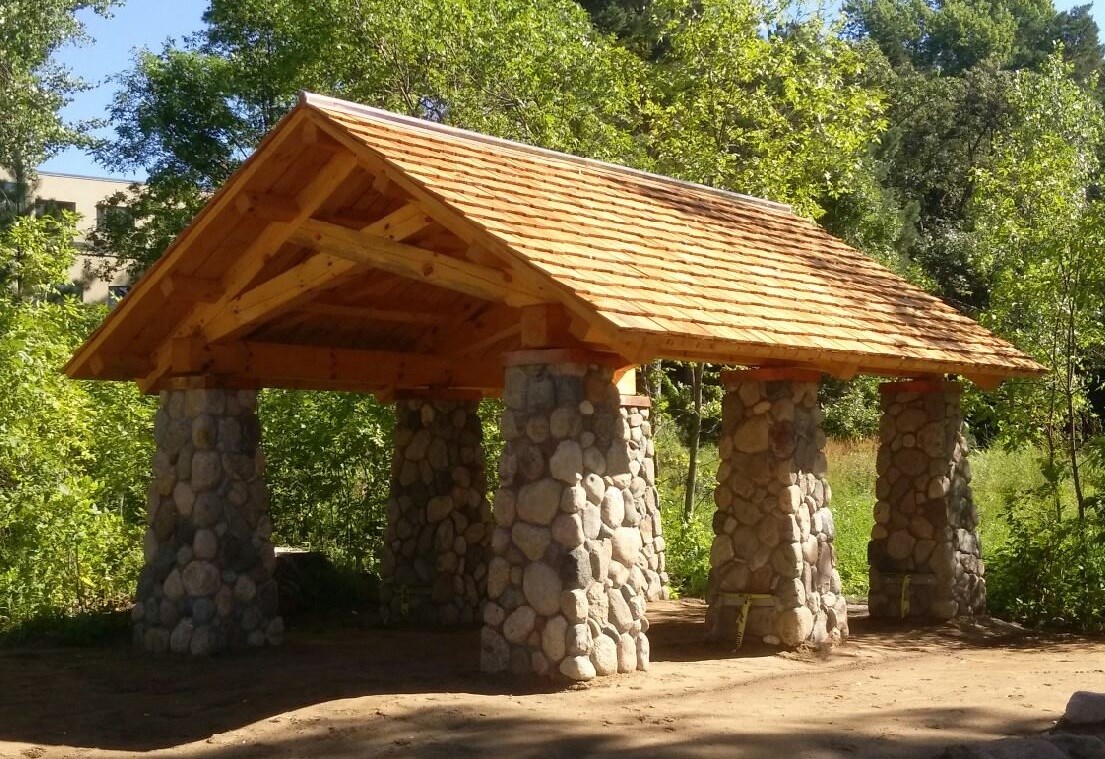 A 2005 report by Dr. Mel Baughman, nationally-recognized forestry expert (retired from the University of Minnesota’s Department of Forest Resources), stated that a nature trail as heavily used as the Chapel Trail should have its own trailhead.  The SJU Office of Sustainability responded by constructing an open-air trailhead pavilion in the summer of 2015.  Made of fieldstone columns and western red cedar shingles, the structure is situated where the sands of the student beach meet the packed soil of the three-mile trail that leads to the Stella Maris Chapel via the northern and eastern sides of Lake Sagatagan.

Other than the locally-sourced cedar shingles and benches, all parts of the trailhead pavilion come directly from the Abbey Arboretum’s 2,500-acre forest.  The main timbers are white pine salvaged from a 2011 wind storm.  Even the mortise-and-tenon-joint technique for constructing the frame of the structure has a local association since this technique is the same one used to build the Quadrangle’s attic in the 1800s.  Four monks (Fr. Lew Grobe, Br. Walter Kieffer, Fr. Nick Kleespie, and Br. David Paul Lange) and seven volunteers (John and Bonita Benschoter, Neil Franz, Tom Kuhn, Chris Schellinger, Jeff Thompson, and Bob Thomsen) travelled to the North House Folk School in Grand Marais, Minnesota to learn the mortise-and-tenon-joint technique.

The Trailhead's construction was completed during the summer of 2015 and its dedication took place at 11:45 a.m. on Sunday, October 4, 2015, following the 10:30 a.m. Mass.  That afternoon, the Arboretum sponsored “Collegeville Colors” along the Chapel Trail.  The afternoon featured artwork, live music, nature activities, and, of course, autumn foliage.

In tandem with planning for the construction of the Trailhead was planning for the construction of a timber-frame bridge to replace what Tom Kroll of the Office of Sustainability referred to as the “worn-out concrete block bridge” along the Chapel Trail.  Later, the Office of Sustainability organized more training at the North House Folk School in July 2016 to construct a covered bridge as well.