The War in Vietnam

As early as 1966, students at SJU and CSB were carrying out protests against the war in Vietnam, including picketing Vice President Hubert H. Humphrey when he came to dedicate the newly built Alcuin Library. 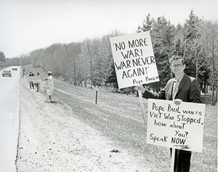 In 1968, with the war in Vietnam escalating, Lyndon Johnson decided not to run for reelection. SJU's own Senator Eugene McCarthy entered the ring as an antiwar candidate, galvanizing "clean for Gene" students, including those from his alma mater.

By 1970, President Nixon's escalation of the war prompted protests, some of them violent, on college campuses across the country.  Over 400 campuses had strikes or closures that year.

Four students were killed by the Ohio National Guard at Kent State on May 4 th.  The next day, the SJU student government facilitated a protest march from St. Cloud State's campus to the Federal Building in downtown St. Cloud.  SJU, CSB and SCS (now SCSU) students were all involved, and a sit-down on Highway 23, St. Cloud's Division Street, stopped traffic across the DeSoto Bridge and brought intervention by the outnumbered local police, though the only attempted arrest was unsuccessful. 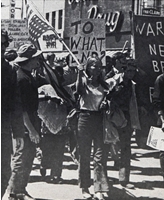 SJU, CSB and Saint Cloud State College (now Saint Cloud State University) students were all involved, and a sit-down on Highway 23, St. Cloud's Division Street, stopped traffic across the DeSoto Bridge and brought intervention by the outnumbered local police, though the only attempted arrest was unsuccessful. 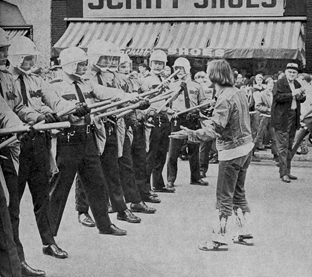 More peace marches were held in the coming days, months and years. 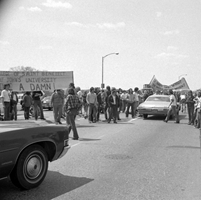 May 11, 1972, an image from the Saint Cloud State University Archives
in the  Minnesota Digital Libraries collection.

SJU and CSB student activists led a shut-down of the St. John's campus on April 21, 1972 as a protest against ROTC:

"'Because this University supports the war in Indochina, it should be shut down. It is time that this institution's direct sanction of a clearly immoral conflict be confronted.'...the sponsorship of the ROTC program by St. John's University directly affects the national war effort, and ...this complicity should cease." (John Thavis, " ROTC: Bringing the War Home," The Record, April 28, 1972, p. 1.) 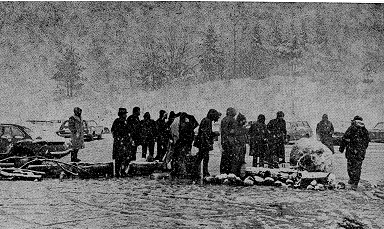 On that snowy day, those seeking to get to campus had to park their cars on the entrance roads and walk in to campus.  (See Hirigoyen, Pat, " STRIKE: Report from the Barricades," The Record April 28, 1972, p. 1, and an article about the event in the Spring 1972 alumni magazine, p. 8-14, which featured a conversation about the blockade between several community members, followed by a response to the protest from SJU president Fr. Michael Blecker on p. 14.)

The ROTC issue had also kept Dorothy Day from accepting an honorary degree and participating in the Library's 1966 dedication.

Compiled in June 2011, and revised in April 2016, from resources in the SJU Archives, and other sources cited herein, by Peggy Landwehr Roske, CSB/SJU Archivist. All rights reserved.