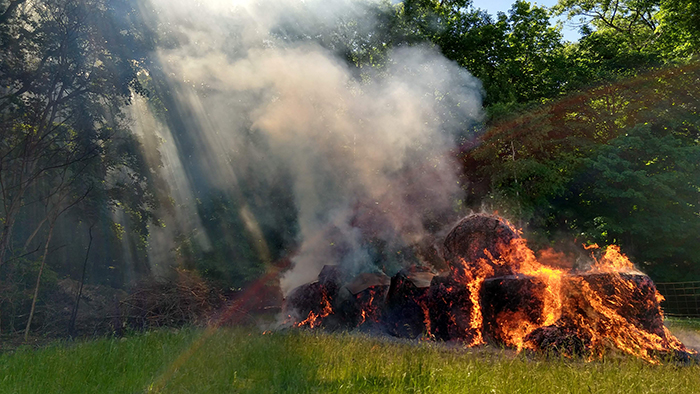 The Saint John's Pottery uses natural and local glaze materials to produce a variety of glaze surfaces. Creating a glaze using natural and local materials involves a lengthy process, beginning with basic raw materials and ending with a refined glaze product ready for application to pottery.

Making a straw ash glaze (navy bean, soybean, sunflower) begins with the collection of dried plant material which is then burned. Similarly, the wood ash (elm, oak, poplar) used to make the glazes are collected after being burned in Bresnahan's wood boiler, which heats his home.

The wood is collected from his own land, and the straw is gathered from Bresnahan family farms in North Dakota. After burning, the straw or wood ashes are collected and stored. Refining the ashes further creates a more pure glaze and includes many cycles of washing, sifting and drying.

To begin, a large 44-gallon bucket is filled half full with raw ash, half with water, and mixed. It is then filtered using a fine mesh screen into a separate bucket, where the ash is left to settle at the bottom. The remaining water is drained off, as it contains a high amount of alkali from the ashes. New water is added to further the washing of the ash.

After mixing the ash with the fresh water for the second time, it is again filtered into a final bucket using a smaller mesh screen to remove any further impure particles. Once the ash has settled, the water is poured off again and the remaining ash is collected and set out to dry.

This process is repeated until all the ash in the original bucket has been filtered. It takes approximately two weeks to complete a full ash washing cycle. The ash is then considered "pure" and ready to be used in a glaze. The dried ashes are often stored until they are mixed for a glaze, which consists of dry ash, refined clay, feldspar, and water.