Eleanor Carney remembers what it was like trying to make a living as a dancer in New York City. Not quite 20 years ago, she and her husband, Ian, were living with another husband-and-wife dance team – Corbin and Whitney Popp – all in a cozy one-bedroom Manhattan apartment.

They alternated which couple got the bedroom and which wound up on the living-room futon.

This was in 2004 and Ian and Corbin were performers in Movin’ Out, a Broadway show based on the music of Billy Joel. In their spare time, Corbin introduced his friend to a product called electroluminescent wire (el-wire). Their respective creative and technical talents flourished together, and they fashioned the wire into shapes and designs that became neon creatures in darkness. They drew on their experience and realized they could perform puppetry, some if it life-sized and accentuated with dance, with what they produced.

They made an ostrich and a dinosaur, among other animals, and – lacking indoor space to maneuver – took their inventions out in Central Park at night. During one of their first experiments, naturally, officers from the New York Police Department showed up.

“Corbin quickly put one of the costumes on, and one of the policemen was like ‘That’s the coolest thing I’ve ever seen,’” Eleanor recalled. “Fortunately, they let them stay. We wouldn’t have had anywhere else to go. With four of us in that apartment, you can imagine what the floor looked like. There were wires and electrical parts everywhere.”

That was the inauspicious debut of Lightwire Theater, which has gone on to perform innovative all-ages theatrical shows to audiences all across America as well as in Abu Dhabi, Belarus, Canada, China, Estonia and Hong Kong. The Carneys and the Popps and other dancers in their growing company even made it to the semifinals on Season 7 of the NBC-TV program America’s Got Talent in 2012. Ten years later, one of their six productions, “A Very Electric Christmas,” will play two shows on Dec. 10 (2 and 7:30 p.m.) in Escher Auditorium at the College of Saint Benedict as part of the annual Fine Arts Series at CSB and Saint John’s University.

“We’re so visual,” Eleanor said of the reasoning behind their decision to take a chance on AGT, something they seriously debated. “The hardest thing was to describe what we did. We got a lot of exposure, and it was a great decision.”

“A Very Electric Christmas” originated in 2013, when Lightwire was looking for a new production. It has toured every year since – even during the pandemic.

“Having been in Nutcracker our entire lives as dancers, from when we were very young, we thought ‘A Very Electric Christmas’ would be a good transition,” Eleanor said. “The show is an original story, but we bring in elements of Nutcracker. That’s our little nod to our history.”

This show is the tale of a misguided bird (“Max”), who ends up at the North Pole for Christmas. Six dancers perform the program, entirely in darkness, with a musical score and almost no spoken words.

“We make everything, and only the music and a few lasers that we use are run on a computer,” Eleanor said. “Otherwise, all of the performers control their own lighting. It takes some time to teach even the most accomplished dancers how to do that because it’s not something we train for. But it’s very satisfying once you get it. I don’t think people realize they’re having to do the choreography, turn the lights on and off, switch to backup and switch colors. It’s rather involved.”

In order to manage 43 performances in 29 U.S. venues between Nov. 25 and Dec. 23, Lightwire splits into two troupes of six dancers each. This year, the Carneys are managing the tour from their base, which is in their native New Orleans.

“It’s not about Ian and I and, as he would say, it’s not about the face,” Eleanor said. “It’s more about the characters. And being dancers ourselves, there’s nothing greater than being able to employ people to do what they love.

“More than 15 years ago, we were traveling New York in taxi cabs, putting all this stuff in to drive to a rented studio for an hour,” she added. “We weren’t career Broadway people. We were ballet people. Once Movin’ Out was over we were like, ‘OK, it’s time to go back home where we have a lot more space to do this.”

On Dec. 10, “Max” will spread his wings for the first time in Central Minnesota. Tickets, ranging from $8 for CSB and SJU students to $40 for regular admission, are available at https://www.csbsju.edu/fine-arts/performances. The show is made possible in part by the voters of Minnesota through a Minnesota State Arts Board operating support grant, thanks to a legislative appropriation from the arts and cultural heritage fund. 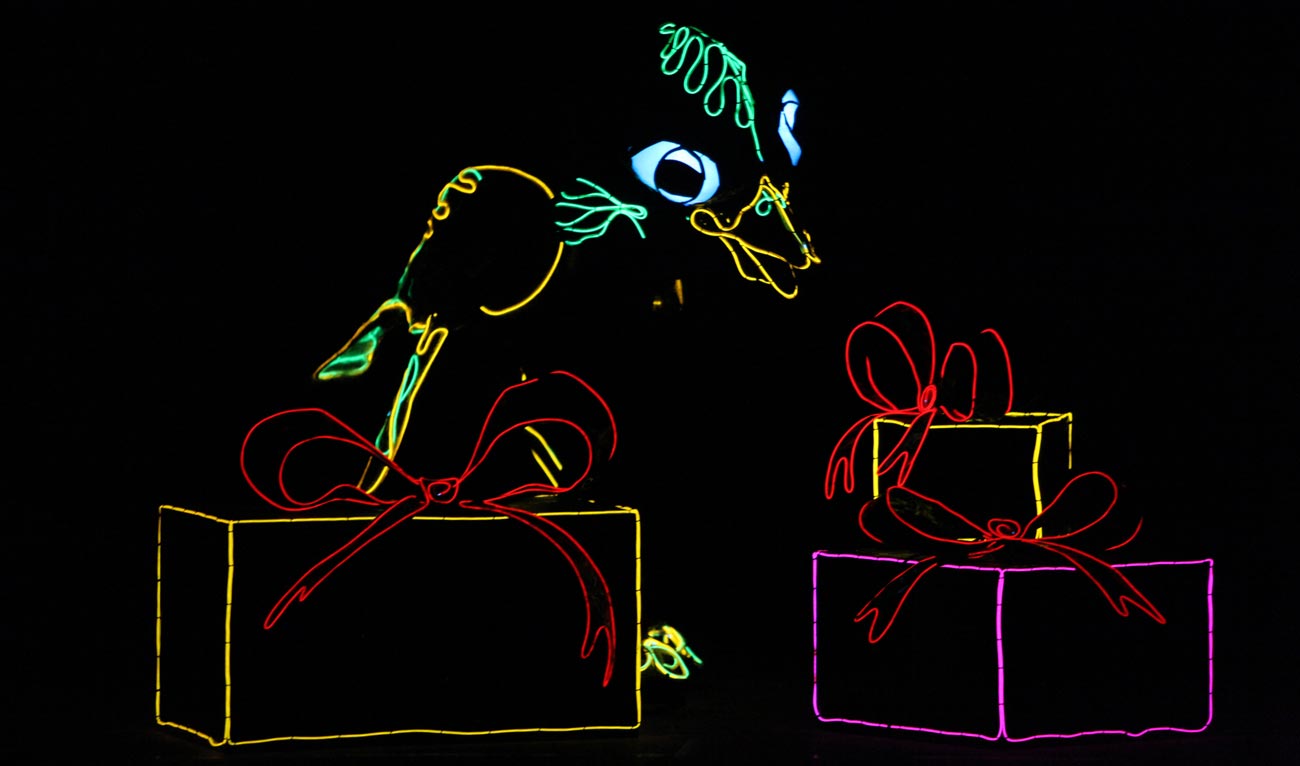 Max is a bird that is the feature character in "A Very Electric Christmas." 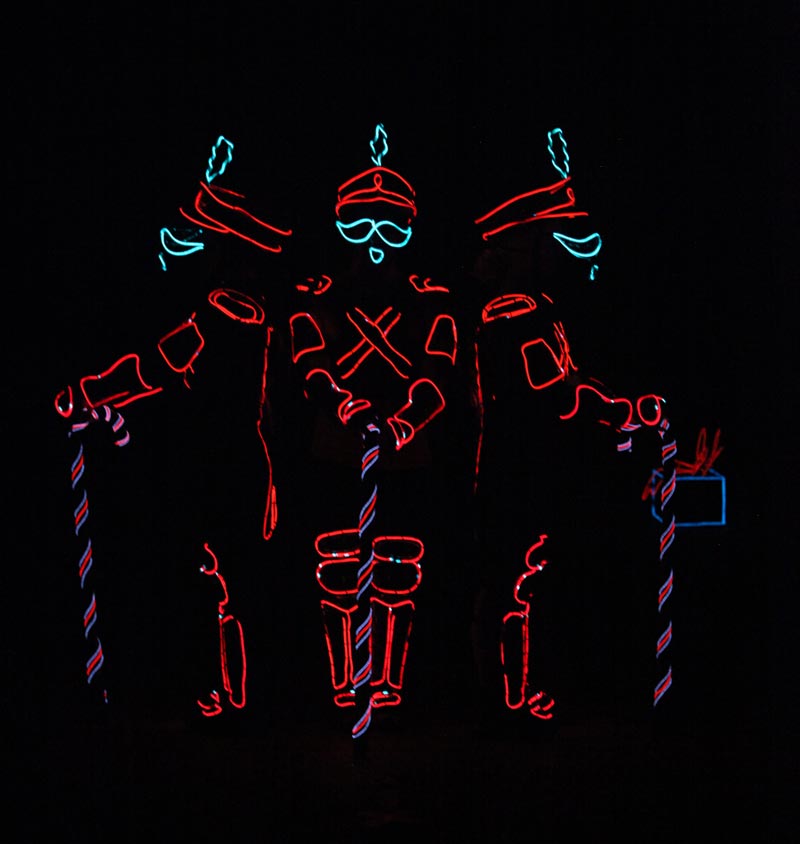 Thanks to electroluminescent wire, Lightwire Theater's dancers glow in the dark.