In spring 2023, the College of Saint Benedict and Saint John’s University will organize and host a French film festival, thanks to a generous grant from Albertine Cinémathèque. This will be one of 50 film festival grants awarded nationwide to honor distinguished French language programs – one of just three grants in Minnesota.

The festival will feature at least six films from Albertine Cinémathèque’s 2022-23 film selection, which includes “We” by Alice Diop, “Gagarine” by Fanny Liatard and Jérémy Trouilh and “Happening” by Audrey Diwan, as well as classic films including the Antoine Doinel films by François Truffaut and “Mr. Klein” by Joseph Losey.

Watch for more details to come on films, times and locations.

On the 21st of April, 2022, during Scholarship and Creativity Day and immediately preceding the Annual Festival Lyrique, the French section installed a new chapter of the National French Honor Society, Pi Delta Phi. Dr. Sheila Turek, regional vice-president for Pi Delta Phi and French professor at the University of Wisconsin-Eau Claire, joined us via Zoom to install the Rho Alpha chapter at CSB+SJU. 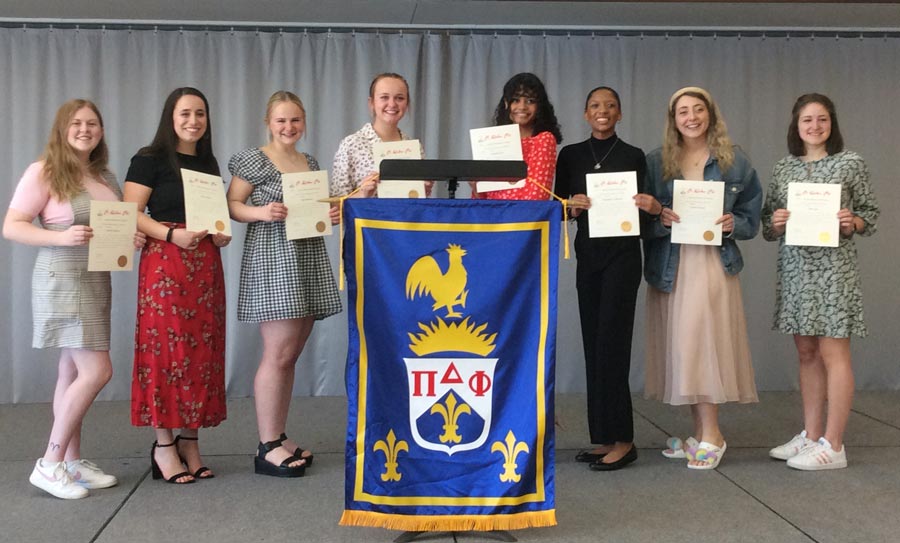 Pi Delta Phi, established in 1906, at UC Berkeley, is the oldest collegiate honors society for a modern language in the United States. In order to qualify to be a member of Pi Delta Phi, students must have a 3.0 average in French and be in the top third of their class. This year, we inducted eight extraordinary Bennies to be our first Rho Alpha members: Alexandria Armbrister ’22, Autumn Ayer ’23, Stevie Dickison ’23, Celeste Dickson’23, Abigail Goff ’22, Cate Luna ’23, Sara Mayeux ’24, and Olivia Solano ’22. As a part of the ceremony, students received Pi Delta Phi insignia and a certificate, and signed the Rho Alpha Chapter Register.

We’re thrilled to have a Pi Delta Phi presence at CSB+SJU, and are very proud of our first eight inductees!

French Studies In the news: