The Pool and the Claire Lynch Gymnasium 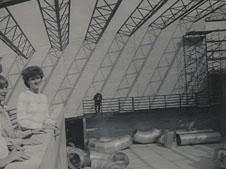 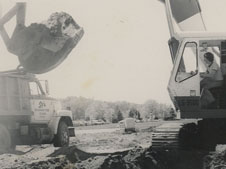 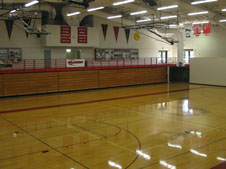 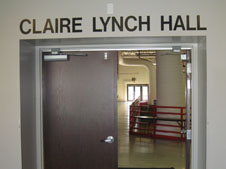 The first CSB gymnasium was located in the basement of St. Teresa Hall. It was used for gym classes required by the curriculum and for an annual student basketball game on March 17 between the students of German descent and of Irish descent. Its one point of interest was that it had two pillars placed strategically on the floor. As sports became more popular among students it became desirable to build a new gym.

The second gymnasium as built in 1961 and was used until 1985, when the third gym was built. That building was then renovated and named Murray Hall in 1995.

The construction of the pool and the Claire Lynch Gymnasium were needed additions for a growing campus and a growing desire for women’s sports.

The plans for the pool were finalized in the early part of 1972. A standard size collegiate pool was to be built. The 75 x 42 foot pool would meet the National Collegiate Athletic Association standards. The design for the pool area was a compromise of visions between President Stanley Idzerda and the Physical Education Chairperson, Miss Elaine Henke. In addition to the pool, the area would contain locker rooms, a sauna and observation windows.

The groundbreaking for the estimated $465,000 pool was held in December of 1972. The government allotted that 90% of the cost could be covered by government funds. The other 10% would have to be covered by the student activity fee. The pool was completed in November of 1973.

In March of 1984, it was recommended to the College that a larger gym be built, creating a 12,000-13,000 square foot athletic facility, with room for 500-800 fans. The former gym was undersized and had no room for spectators. Conlan Construction was hired as the general contractor. After a meeting with the architects of the project, it was decided that the facility should cover 23,234 square feet. This extension would provide space for advancement and later phases of the campus development. The construction of the gym was done before the much needed Clemens Library, due to the availability of college reserve funds.

The estimated $900,000 gym/athletic building would contain the standard size gymnasium and weight rooms. The new building was finished in the late months of 1984. It was named after Sr. Claire Lynch, Dean of the College from 1931-1942. The first basketball game was held on January 24, 1985.

In 1984, the College of St. Benedict could boast that it had the nicest and most up-to-date collegiate athletic facility in the state.

In 2017, the Claire Lynch Gymnasium received a refinished floor and new bleachers and the Clemens Fieldhouse acquired a new floor.