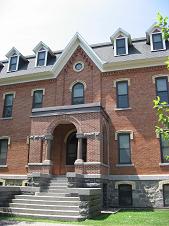 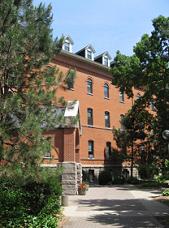 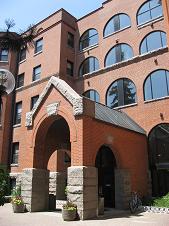 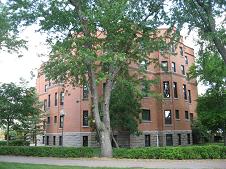 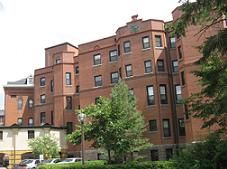 Photos by the Archivist

The Main Building has been a part of the college campus since its origins.  When the Sisters of the Order of St. Benedict were allowed to begin an educational institution in St. Joseph in 1881, the campus for St. Benedict's Academy consisted solely of one building, St. Cecilia Hall.  Over the years, several additions were made to Cecilia Hall, and the entire complex came to be called the Main Building.  Until 1956, when the College expanded into the Mary Hall complex, all the the functions of the schools - high school (Academy) and College, classrooms and housing, food service and offices - were all located in this one building.  Gradually, other buildings were constructed on campus to meet more of the needs of the college, but the Main Building remains an important part of the college and its history.

The Main Building began as one building but grew over the decades as the community expanded.  The first building, St. Cecilia Hall, was designed by Gregory Steil and built from 1879 to 1882.  It had a stone foundation, brick and wood walls, and an asphalt roof.  On May 6, 1882, the Sisters of the Order of St. Benedict and pupils of the Academy officially moved into St. Cecilia Hall.  Upon its completion, it served as a dual convent and academy for its thirty-six students.  At the time, it was the only finishing school between St. Paul, Minnesota and the Rocky Mountains.  The school drew pupils from all over the Midwest and Canada.  A majority of the students living in St. Cecilia Hall were from wealthy and influential families that valued a Christian education which included both intellectual and practical learning.  The northern part of Cecilia Hall was the convent, and housed a study hall and chapel on its second floor. The students of St. Benedict's Academy lived in the southern half of the building.

Two additions were made to Cecilia Hall: St. Benedict Hall in 1882 on the north side and expanding toward the west, and then St. Scholastica in 1892, added onto the north end of St. Benedict Hall.  With the latter in between them, St. Scholastica was built to mimic St. Cecilia's original architectural design, bringing symmetry to the east facade of the three-building complex.  These additions were due to the increasing enrollment at the Academy and a growing community of sisters. 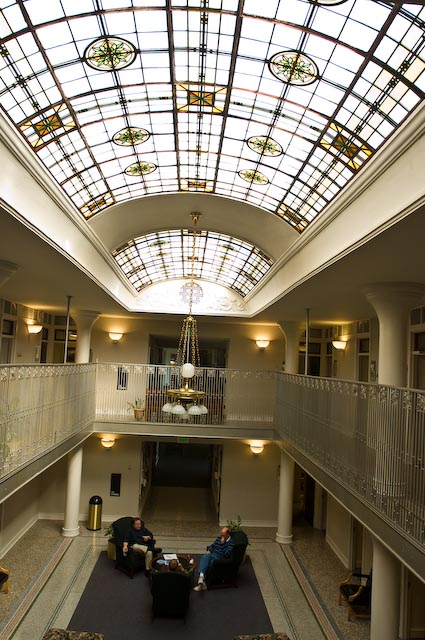 In 1899, the Sisters built a southern addition to Cecilia Hall to provide more space for the Sisters and Academy students.  George Bergmann constructed this new addition, called St. Gertrude Hall, using similar materials to Cecilia Hall. It was 3 ½ stories high and featured a four-story rounded corner tower with a conical roof.  At the time, Gertrude Hall was built at a cost of $20,558.33. In 1906, A.J. Blix designed and added seven dormers on the top floor of Gertrude to match the original gable dormers of the other buildings. Although Gertrude Hall was originally built as a three-story structure, the fourth floor, with its cupolas, was added in 1953. The basement of Gertrude contained the dining room, the first floor contained classrooms, and the third and fourth floors contained student dormitories.  The Academy and College used the dormitories until 1956, phasing them out as new dormitories (Aurora in 1956, Regina in 1963, and Corona in 1969) were built along with Mary Commons.   In 1979, a wood and brick semicircular entrance was added to the southeast corner.  Gradually, the use of Gertrude for classrooms decreased as more space was needed for administrative purposes, and by 2004, except for the fourth floor Nursing Department instructional spaces, Gertrude was used by the College for administrative and dining space only.

The fifth and newest wing of the Main Building is Teresa Hall (sometimes also referenced as St. Theresa Hall).  Built due to an expanding convent population and the anticipated establishment of the College, designer George Stauduhar angled St. Teresa Hall off of the southwest corner of Gertrude Hall.  Construction began in 1912, finishing in 1914.  During this construction, the Sacred Heart Chapel was built as well.  While built with the same materials as Saints Cecilia and Gertrude Halls, Teresa was still erected much faster due to its less complicated architecture.  It was immediately put to many uses.  The ground floor housed the gymnasium, and a candy store was located nearby which sold sweets from the convent bakery. The first floor contained a museum and art and sewing classrooms and a library.   The second floor of Teresa Hall contained an auditorium that also served as a study hall until 1964.  According to the 1926 college bulletin, this room had a motion picture machine, balopticon, stereopticon and grand piano.  The third and fourth floors, called the Rotunda, featured single and double rooms surrounding a large open gathering space underneath a glass skylight.

In 1961, a freestanding gymnasium was built on the southwest side of campus, which allowed the growing library collection to expand into the ground floor of Teresa Hall.  The College didn't replace the wooden floor of the gym, so one could still see the lines of the basketball court running under the bookstacks.  The College used this library until the 1986 opening of Clemens Library.

In 1989, Teresa was renovated by Grooters & Associates.  The first phase, during the 1988-89 academic year, included renovations of the previously residential third and fourth floors, the Rotunda, into faculty offices.  A conference and seminar room also replaced two dorm rooms on the southwest end.  The second floor, which had been used as the library's AV/media center, became the college's business offices in the fall of 1988.  The second phase restored much of the first floor to preserve its original character.  Special events rooms maintained the ambience of the original library, with its fireside lounges.  Meeting and conference rooms, offices, and housekeeping spaces were added or remodelled, and attempts were made to install fixtures and furnishings to reflect the original character of the spaces.  A significant feature of phase two was a new entrance created on Teresa's southern side, with the consent of the convent.  An addition for the entrance brought the formerly exterior staircase inside, and a new elevator was added inside the entrance as well, to make both Gertrude and Teresa Halls more accessible.  The Teresa Reception Center (TRC) is on the National Register of Historic Places and is used for meetings, speakers and other events.

In 2006, construction for a new cafeteria and dining area began.  Upon completion of the Gorecki Dining Center in 2007, the basement of St. Gertrude Hall was given back to the Sisters of St. Benedict for their use.

The Main Building continued to serve multiple purposes for the College.  Academic uses include a couple of classrooms on the third floor of St. Gertrude Hall; offices in Gertrude and the Teresa Hall Rotunda for theology, accounting, management, and history; and classrooms and offices on the fourth floor for the nursing department.  The Main Building also served as the primary administrative building for the College, with offices for the President, Admission, Communication and Marketing Services, Student Accounts, Human Resources, Institutional Advancement, and Financial Aid.

In 2015, the Nursing Department on the 4th floor of Gertrude Hall was completely renovated and upgraded to be a state-of-the-art teaching facility, with technological advances to prepare students for what they would experience in career settings.

After years of planning and the start of fundraising for a new academic building to go between the Benedicta Arts Center and the Haehn Campus Center, and because the Sisters were looking to raze or sell some of their buildings, it was decided to purchase three adjacent buildings from the Monastery and renovate them for administrative offices. This would free up space in the Main Building, which could be re-purposed for the departments that had been slated to occupy the new building: Economics, Math, Computer Science and Psychology. Two of the three old buildings - Caedmon and the Artisan Studio - were linked by a new atrium, and the administrative offices moved into the building, renamed Schoenecker Commons, in 2018. The President and her staff also moved, into second floor of Mary Commons; Student Development relocated to the Administrative Services Building (ASB).

Many of the spaces within Gertrude and Teresa Halls were then remodelled in 2019 for academics.  Econ had been in the building for several years, but Math and Computer Science had been split between the Henrita Academic Building (HAB) at St. Ben's and the Peter Engel science hall at St. John's, and the Psychology department had been in "PEngl" as well.  (These moves to CSB set off a major remodeling of PEngl at SJU, too.)  A dedication and blessing of the Main Building remodeling took place on October 24, 2019.

The Main Building, with its changes and adaptations over more than a century of use, continues to be an essential space for the academic life of the college.

See also Photos of the Main Building(Note: this page may take a long time to load.)

Special thanks to Ariel Smelter '12 for drafting the original text for this page.