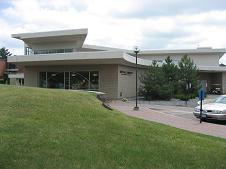 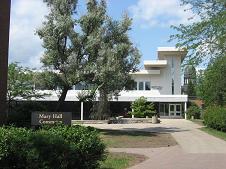 The building of Mary Commons was the College’s first major construction project. Until construction began, there were only two buildings that constituted the whole of the campus. The Commons was built simultaneously with Aurora Hall, the first-year dormitory. Both buildings were designed by Richard Hammel and Curtis Green of St. Paul, designers who became long-standing partners to the College. The estimated cost for the necessary expansion was $1 million. To help with this financial obligation, the Sisters of St. Benedict called upon alumnae, friends, and all supporters of Christian education to donate to this project. Mary Hall, a twenty-three inch walking doll and her wardrobe of handmade clothes, was a fundraiser sponsored by the Minnesota Valley Chapter of the CSB Alumnae Association to add to the funds already raised for the project. Ground was broken on April 6, 1955, the cornerstone was laid on April 30, 1955, and the first group of students moved into Aurora Hall in September, 1956.

In 1998, Mary Commons underwent an expansion and a renovation. The Grace Donovan Center for Student Development was a two story addition, providing space for Residential Life, Personal and Professional Development and Multicultural/International offices. The student lounge on the south side of the first floor was renovated to include large couches and a big screen TV. The north side was expanded to provide space for a new campus bookstore.  The campus mail center was also moved into the new space, adjacent to the Mary Commons information desk.

The bookstore and mail center had been housed in Loretto Hall, a building that used to stand between the Teresa Reception Center and the Monastery's garage building. In 1974, a campus center that included the bookstore and mail center was built. Later, the campus center would become the Academic Services Building. In 1997 it was decided that the Bookstore needed to move because of the lack of space. Both the Haehn Campus Center and Mary Commons were considered. The main goal was of the move would be to allow the bookstore to expand, eliminate clutter and create an inviting space. Mary Commons was chosen because there was already too much going on within the HCC.

On April 9, 2000, the refurbished Mary Commons and new bookstore were dedicated. During the summer of 2017, the Mary Commons Coutryard was updated with new sidewalks, landscaping, and the installation of a statue of Mary and firepits.

From 2018 to Fall 2019, many department locations changed due to new buildings being purchased for administrative offices. These new buildings opened up more space in the Main Building for academic departments.  Changes were also made in Mary Commons including the move of CSB's President and her staff to Upper Mary Commons. Other departments located in Mary Commons are Academic Affairs, Academic Assessment and Effectiveness, Institutional Planning and Research, and CSB Sustainability.