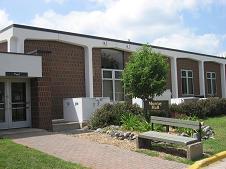 The first gym facility on campus was in the basement of St. Teresa Hall.  But as the college grew and there were more opportunities for girls in sports, a new gym was needed, since the first did not meet collegiate size regulations (not to mention the problem of its pillars, around which the students had to play their games).

In 1961 the new gym/physical education building was completed, designed by Hammel and Green and constructed by Standard Construction of Minneapolis.  It featured some classroom and office space upstairs, storage space downstairs, and a gymnasium floor built below grade.  Although the size of the new gymnasium was to college standards, there was no room for spectators except those who could form a single line around the perimeter, nor was it handicapped-accessible. The new gym was used for basketball, volleyball and other games for both the CSB students and, until it closed in 1973, the students of St. Benedict’s High School.  (1973 was also the year when the pool building was built adjacent to the gym.)

This building remained the college gym until 1985, when Claire Lynch Hall was completed.  The old gym was then remodeled into classrooms and offices for Athletics, the Physical Education Department, and Campus Security.  In 1995 it underwent a major remodeling, this time to create office and gathering spaces for Student Activities, Campus Ministry, and the St. Ben’s Senate, in addition to two racquetball courts and storage in the basement.  An elevator was also installed.  By 1996, it was connected to the Haehn Campus Center with a hallway.

In 2021, the north end of the upper floor of Murray Hall was entirely renovated into a new Multicultural Center, a space for underrepresented students to have meetings, programming, or simply hang out. It includes offices, a conference room and a land acknowledgment of the homeland of the Dakota and Anishinaabe people.