The Clemens Library and the Alcuin Library at St. John’s University together offer students the second largest private library collection in Minnesota. Before 1986, though, the library at the College of St. Benedict was a small contributor to this boast. The building of Clemens Library came from the need to expand for the ever growing collection of books and the lack of study space for students. The College library had been housed in the Main Building since 1913 and was only 27% of the average college library space. Due to the age of the Main Building, expansion was not an option. The students of St. Benedict’s relied heavily on the resources at St. John’s Alcuin Library, but the St. John’s library was only built to accommodate one campus population.

The first donation of $1 million was given by Mr. Bill Clemens, President of Bankers Systems, Inc and his wife Virginia. The Clemenses said their donation was an “investment in the future” and a thank you to the Benedictines for the tremendous contribution they had made to the area. Because their contribution was the first $1 million, their name was honored as the title of the library.

Other major contributors for the building of the library included:

Construction of the new Clemens Library began in 1985. Warner, Burns, Toan, and Lunde of New York were chosen to design the library. The key components of the design were simplicity, function and plenty of space. The architects, Eleanor Larabee and Danforth Toan, anticipated a shift from print to electronic media, as well as the expansion of the book collections. With this in mind, a computer study area was included in the library design, as well as provisions for a second tier of stacks. The library was completed in time for the beginning of the 1986-1987 school year.

One of the special features of the Clemens library is the bell tower. The inspiration and design for the tower came from the Benedictine Convent in Eichstatt, the Bavarian Mother House from whence the Benedictine Sisters in St. Joseph had come. 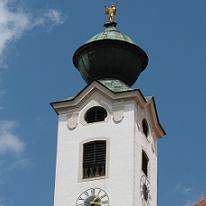 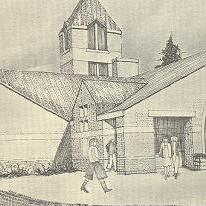 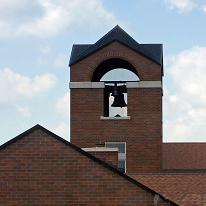 The fireplace lounge was included to harken back to the fireplaces in the former library in Teresa Reception Center.

After the general construction of the library, the book collection had to be transferred from the Main Building to the new location. The shift began on August 5, 1986. The move was handled by Apollo Moving Specialists, a division of North American Van Lines, one of five companies that specialized in the relocation of library collections. With 77 employees and 30 students from both St. John’s and St. Ben’s, the move took 4 days. All items had to be kept in order during this process. Altogether, the relocation included the moving of:

The dedication of the new Clemens Library was on September 13, 1986.

Initially, the bell tower had no bells. Funds for the bells were donated later by Gladys and Clifford Wold of Fargo, North Dakota, as a memorial for their parents, Dr. And Mrs. A.O. Wold and Mr. and Mrs. P. J. Antony. Gladys (Antony) Wold attended CSB in 1928-29. Containing 3,800 pounds of bronze, the bells were cast in Holland. Their dedication took place on September 11, 1987, when Bishop Jerome Hanus, OSB, blessed and dedicated the peal of bells and they were rung for the first time.

The four bells (largest to smallest) are named Lectio (slow, attentive reading), Meditatio (thoughtful, loving repetition), Oratio (inner, responsive prayer) and Contemplatio (rest in God). These are the four traditional stages in the cycle of monastic learning. The bells are also meant to signal the welcoming and acceptance of all faiths within the school.

Cliff Wold wrote the following text, which was inscribed on the bells:

Let the Bell Ring out,
Calling all Christians to God’s temple,
For we are all God’s Children united in His Service

In 2001, a new computer center was added to the south and southeast sections of Clemens Library.  Previously located in the Henrita Academic Building, it was moved due to space constraints.  The new computer lab included computers for students, and a Training Center and MultiMedia/Mobile station. In the summer of 2012, most of the Information Technology Services staff housed in the library moved to a new space in the basement of Lottie Hall, although the computers, training lab, help desk, and some network functions remained. The latter moved to the northwest corner of the building and the library director, serials, and media operations were relocated to the southeast area of the building.

In 2007, the Gorecki Dining Center was built near the library, and the two buildings are connected.

On April 16, 2013, Marton Varo's statue Breaking Free IV was installed in the library.

During the summer 0f 2014, the Clemens Library interior got a fresh coat of paint and some carpeting, dispensing with the "1980s-era" mauve & pink in favor of white, tan, and dark olive green.

During the summer of 2019, Clemens Library was renovated to make space for XPD (Experiential and Professional Development - formerly Career Services - in the original "Quiet Study Area"), new spaces for Information Technology (in the original Media, i.e. east, wing), and more group study rooms in the north alcove. The Clemens Perk coffee shop was also updated, as were library staff office spaces.