In 1880, the Sisters of St. Benedict opened a boarding academy in St. Joseph.  Originally called St. Joseph's Academy, it was located in the old Haarman building across the street from the convent and was rented by the sisters.  Two years later the academy moved into a new building, a combination of convent and academy, and the school was renamed St. Benedict's Convent and Academy.  At that time it was the westernmost Catholic "finishing school" for young women between St. Paul and the Rocky Mountains.  On March 23, 1887, a high school was incorporated into the Academy.  All classrooms and residence halls were housed in St. Gertrude Hall.  The Academy continued with the opening of an accredited junior college in 1913, which became a four year college by 1918.  The high school and college became a member of the North Central Association of Colleges and Secondary Schools in 1929.  In 1940 the school was renamed as St. Benedict's High School.

Prior to 1938, high school boarding students were accepted and lived in the same building as the college students.  In 1938, the high school was closed to lay boarders; only those who were aspiring to become members of the Community were allowed to stay in residence.  Local lay students, though, could attend the high school.  By special request, the community opened the old Knapp farm house to high school boarders from 1943 to 1947.  From 1947 to 1956 there were again no high school boarders except aspirants, but in 1956, because of continued requests, the Scholasticate building was converted into a boarding high school; at that time, all of the high school’s rooms and classrooms were still housed in St. Gertrude Hall.

In 1960 construction began on two buildings specifically for the high school: one for classrooms, and the other for a dormitory.  The construction of these new buildings was made possible by the encouragement of Bishop Peter W. Bartholome of the St. Cloud Diocese and the material support offered by many of the parishes from the diocese.  The total cost of these buildings was approximately $900,000; the diocese provided $400,000 of this total.  The planning committee members for the new high school buildings were Sr. Mary Patrick Murray, chair; Sr. Mirella Burns, principal; and Sr. Norbert Ann Caspers, Sr. Mildred Ann Blatz, and Sr. Clarus Himsl.  Principals from area high schools acted as consultants for the project.  Hammel and Green, Inc. of St. Paul were hired as the architects.  Groundbreaking occurred on January 12, 1960.  The buildings opened to students on September 26, 1960, although the building was not totally completed until mid-October.  Bishop Bartholome dedicated the new buildings on December 18, 1960.

The high school enrollment was never intended to be larger than two hundred because the sisters believed that their approach to education as shared life in community could be realized only in a small group where students could feel at home.  Over its existence, 220 members of the monastic community had been involved in its educational apostolate.  The highest recorded enrollment in the high school was 170 in 1961-1962.  Minnesota's consolidation of public schools and the effects of the cultural revolution of the 1960s and 1970s resulting in the youth's decreased interest in organized religion made it difficult to maintain church boarding schools.  Due to the financial difficulties of low enrollment, the high school was closed after the 1972-1973 school year, after 93 years of existence.  Coincidentally, the high school's 1973 yearbook depicted a total of 93 students.  Thirty of them were in the graduating class.

In the summer of 1973, both of the former St. Ben's High School buildings were leased to the College of St. Benedict and renovated for its use.

The high school’s academic building was renamed the Henrita Academic Building (HAB), after Mother Henrita Osendorf, who was the prioress of the Benedictine Community from 1961-1973.  At this time, Henrita Academic Building became the main academic building for the college.  Over time, the high school gymnasium was horizontally bisected by a new floor to create classrooms and offices on both levels, the library was partitioned to create offices, the partitions of the music practice rooms were removed and the Education department took up residence in their space, the day students' locker room became a media area, the gymnasium locker room became a duplicating center, and many other areas were repurposed.  In 1982, an expansion created space for the Math, Economics & Business Administration (EBA) and computer departments, much of it in an underground addition that connected the HAB and Richarda Hall below ground with academic space and above ground with a glassed-in walkway.

Between 2018 and 2019, the main and lower floors of the HAB underwent renovations to modernize the space. The main level's oak doors were replaced with windows to incorporate more light and the classrooms were introduced to new technology as well as modern lounge and classroom furniture. The lower level of the HAB was remodeled to house Exercise Science and Sport Studies (ESSS). 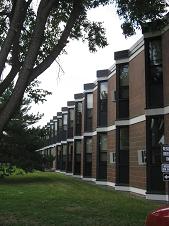 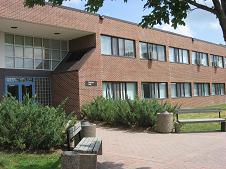 The residence hall, christened Richarda Hall after Sr. Richarda Peters, the Dean of Residence during the 1940s, would house the college’s incoming first year students as well as faculty offices.  The large dorm rooms, each featuring eight curtained beds and eight closets (four on each side), were partitioned down the center to create smaller rooms for college residents and offices for faculty.  Continuing the alphabetical labelling system established for the dorms, the first and second floors of Richarda Hall were labeled "N" and "P" respectively.

In 1986, a wing was added to Richarda Hall in order to house an additional 50 students.  In 1992, CSB offered a wing of Richarda Hall to the female high school students of St. John's Prep so that they could have an on-campus learning experience similar to what the male students had at SJU.

In the fall of 2011, the female high school students from St. John's Prep moved from Richarda Hall into different accommodations (Emmaus Hall at St. John's). The change was made in order to begin the conversion of Richarda Hall into a short-term educational space as the CSB administration negotiated the long-term moves of various departments in preparation for a new academic building, plans for which were eventually abandoned in favor of repurposing several buildings into Schoenecker Commons and renovating Gertrude and Teresa Halls into exculsively academic spaces.

In the fall of  2012 the building was again renovated and became the home of the History Department.