Want to get involved with Sustainability on campus?

Check out the links below and on the left side menu to learn about how you can get involved around campus.

There is plenty going on in the Office of Sustainability! Let's learn more about our current projects. Have one of your own? Use our Form to let us know!

Save resources in the classroom, office, and residence halls

As a community which cares about sustainability, help create a culture of sustainability by doing these simple things to cut waste and energy use.

This guide was created by students with the help of campus staff to provide some easy tips for living a sustainable lifestyle on our campuses.

The College of Saint Benedict and Saint John's University offer a number of courses and programs focusing on the environment and sustainability.

Take part in a club

There are a variety of clubs which take part in sustainability efforts on campus! For environmental sustainability, check out Full Circle Greenhouse and Climate Justice Club.

Submit a proposal for a Revolving Loan

Anybody can submit a proposal for a sustainability project through our two funds for long-term and short-term projects. Projects will be audited, and the results will be posted on our website to prove the viability and legitimacy of the fund. A committee of faculty, staff, administration, and students govern the fund.

The possibilities are endless. We want to work with you to take your sustainable idea from concept to reality.  Back in 2011, Stephen Johnson approached Nick Moe at the SJU Office of Sustainability with his idea of building a greenhouse on campus. Just two years later, the Refectory started buying lettuce grown right at SJU.  Another example of student-led initiatives was the idea of an intern in the Office of Sustainability. Michael Lockwood wanted to reduce phantom energy on campus. During the summer of 2013, 125 phantom energy-reducing powerstrips were distributed across campus.

Land Acknowledgements and Why We Make Them

"The land we gather on today is the traditional homeland of the Dakhóta and Anishinaabe peoples. We honor and respect the Indigenous peoples who were forcibly removed from, and are still connected to this territory.

There are over twenty Native and Indigenous students at our schools from different Nations. St. Ben’s Monastery and St. John’s Abbey used to operate boarding schools for Native children. Now, students, faculty, and staff are working to repair relationships with our Native Nation neighbors. There are well over 35,000 Indigenous people living in the Twin Cities metro area, including a diversity of nations. Centuries of genocide and forced assimilation have created a range of challenges for Indigenous peoples.
I open up this classroom as a space to discuss ways in which we can support Indigenous people in our area and enact a reparations framework – a framework that works to return land to Native people."

Have you ever heard these words spoken at the start of an event or class on campus? It's called a land acknowledgement. It's a way of ackowledging historic damage and setting your actions, especially at large events, in the context of that history. It's a way to keep yourself thoughtful about the inclusion of Indigenous issues and peoples. They change depending on a few things:

WHERE: This is the big question. North America (and South America, Central America, Canada, Alaska, and more) was home to countless nations and groups of Indigenous people before White settlers got there. The campuses of CSB and SJU, for example, straddle the territories of Dakhóta and Anishinaabe peoples. To see whose land your home or college is on, use Native-Land.ca.

WHO: Who are you? CSB/SJU has a lot of history (now being uncovered by Ted Gordon and his team of researchers!) of other harmful actions involving Indigenous peoples, including but not limited to establishing boarding schools that contributed to erasure of Indigenous culture in our area.

WHAT: What more can you do about Indigenous rights than say a statement? Educators like Corrie Grosse (below) might affirm that they work to include Native issues in their curriculum. An institutional body like the Joint Faculty Senate (#4) has the power to commit to further action.

WHY: Land Acknowledgements are a call to action-- a call to keep Indigenous justice in your thoughts at events, gatherings, and in every email. You can recite a land acknowledgement at family dinners or gatherings-- Just use Native-Land.ca and historical records (I used Ecosia for example #5) to really dig into the history in your area.

J. Doe (pronouns: They/Them)
GBUS Major | Environmental Studies Minor
The land we gather on today is the traditional homeland of the Dakhóta and Anishinaabe peoples. We honor and respect the Indigenous peoples who were forcibly removed from, and are still connected to this territory. Find out whose territory you live and work on.

CSB/SJU students can use the italicized acknowedgement at the top of this article as an email signature. Just put it below your name or major, and remember to use it as an opportunity for thoughtful reflection. You can also add your own commitment or links if you wish-- like Peggy does in hers.

Land Acknowledgements are a good first step toward including justice in your everyday acts. The next step is to act on it! Bring up Native issues in board meetings and class discussions. Be an advocate and a curious learner when it comes to Indigenous issues. If you don't know something, Ecosia it and listen to Indigenous voices.

Friends of the Sustainability Office 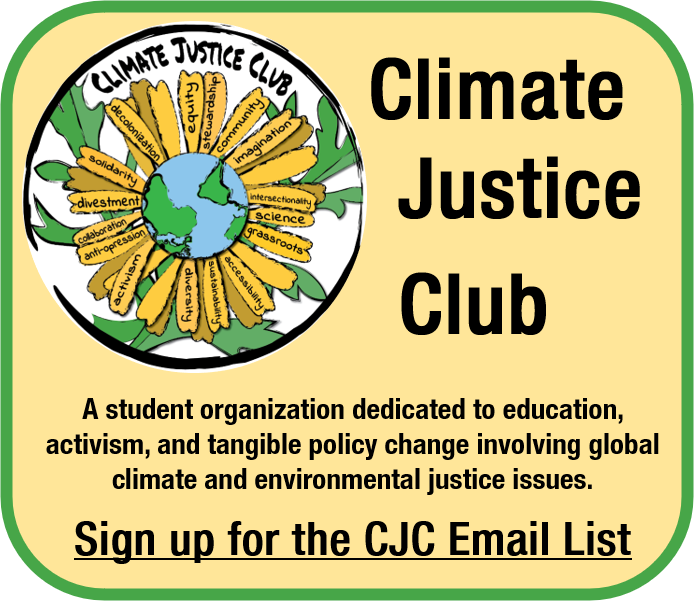 [email protected] works for education, activism, and tangible policy change on global climate and environmental justice from our campus. Students choose a Working Group (like CSB/SJU Fossil Fuel Divestment, Line 3 Activism, Outreach/Education and more) and work with friends to affect global change on the local scale. Join the Slack and the email list, then email [email protected] to get involved! The board meets regularly, as do working groups.

We are so lucky to have a locally owned grocery store right next to campus - only a 5-minute walk from most dorms.

DID YOU KNOW: Student Memberships only cost 20$ for the whole academic year! Head in on Sundays to take advantage of the 5% student member discount on all your groceries, from produce to dairy, bulk items to snacks and candy. 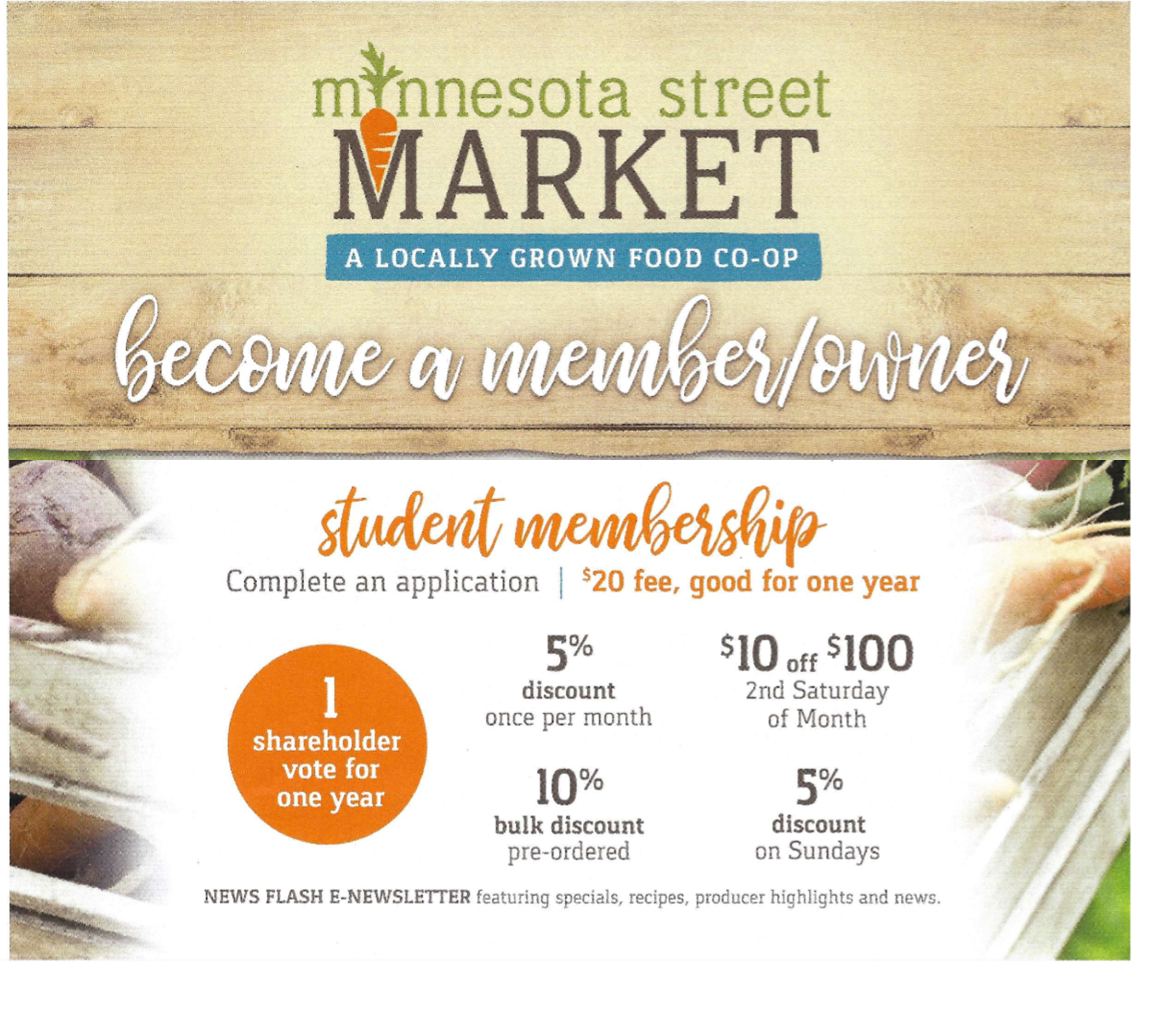 Winter cold can't stop our local farmers and makers from having a market! Every Saturday the Winter Market is held in the Resurrection Lutheran Church from 9am-1pm. Once it gets warm, the market will move underneath the St. Joe water tower!

The Bennie Career Closet provides a place right on campus to donate and "rent" professional and business attire - by Bennies, for Bennies. Check out their page for open hours or email for an appointment and stop by Murray 004!