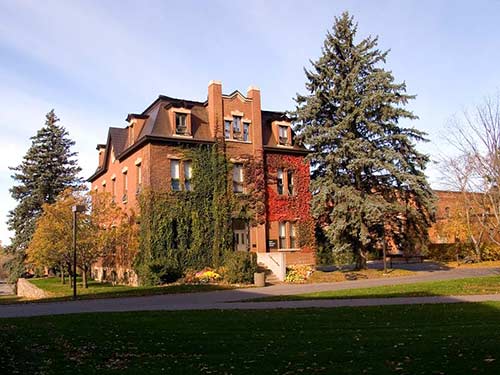 Saint Gregory House (Greg House) was built in 1907 as an infirmary for students. This three-story brick building (40'x70') with basement, built of Menomonie sand-mould brick with Kasota stone trimmings, is located west of the Quadrangle Building. When it was first built, a solid brick wall divided the building in half so that the contagious diseases could be treated in quarantine. In 1933 a substantial addition was put on the west side of the building. The dividing wall was removed; the contagious cases were then to be treated on the third floor. A chapel was added on the first floor. A sun porch was constructed outside the third floor with its own staircase. The porch, which needed additional structural support, allowed for four new rooms to be added to the first and second floors. In 1976, when the present health center was built, Greg House became residential housing. It was renovated in 1984 and now has housing for 34 students in single, double, and triple rooms. Saint Gregory House is listed in the National Register of Historic Places.