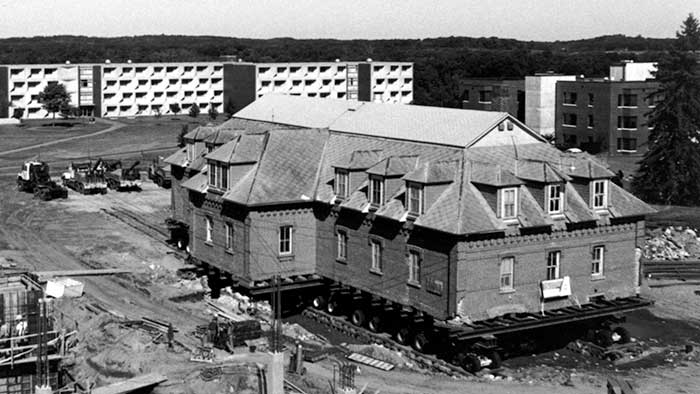 The Saint John's Pottery is housed in Saint Joseph Hall, an 1899 structure converted into a brick dormitory in 1924. In 1979, Richard Bresnahan initiated The Saint John's Pottery, using Joe Hall's underground root cellars as an ideal climate for drying pottery. A garage became the site of a forty foot, five chamber wood kiln built by volunteers using donated and recycled materials.

Just prior to 1990, a series of events took place at Saint John's that dramatically altered the future course of The Saint John's Pottery. In response to a longstanding need, the University decided to construct a student center on campus. The site selected for this new building was at that time Saint Joseph Hall–the location of the studio and its wood-burning kiln.

Br. Dietrich Reinhart, OSB, President of the University, approved the relocation of Joe Hall and the rebuilding of the pottery at a new campus location. The Abbey and the Saint John's Board of Regents approved the recommendations. This was a defining moment for The Saint John's Pottery that cemented its long-term future at Saint John's.

A New Studio for 21st-Century Learning

In 1991, Joe Hall was raised and moved 800 yards to the western edge of campus, next to the Saint John's Art Center. The building was set on a new foundation designed by architect James Dean to house the studio. The new site enabled the program to expand into improved facilities and to incorporate several environmentally-aware methods and technologies.

The first improvement was a clay washing system that uses recycled water, which saves thousands of gallons of drinkable water and serves as an environmental laboratory for students in the Environmental Studies program at Saint John's University and the College of Saint Benedict. It uses compressed air from the powerhouse, eliminating the use of electricity.

The studio has two energy-efficient indoor kilns: a large gas kiln and a small electric kiln. These kilns are used to create work in support of the pottery program at times when the studio is not working towards a wood firing. An online computer system allows science students to retrieve information relating to energy consumption and exhaust emissions.

A Commitment to Sustainability and the Environment

The Saint John's Pottery is the first program in the United States to address issues of energy consumption and emissions during the firing process. This integration of science and creativity is unique to academic and production pottery programs. The studio uses energy-efficient lighting and includes a shipping room which uses recycled packaging materials from the campus.

The construction of a new kiln, the largest wood burning kiln in North America, began in 1992 and was completed in 1994. Composed of three chambers, the Johanna Kiln is 87 feet long, 6 feet 8 inches high, 6 feet wide, and has a capacity of 1,600 cubic feet. A kiln of this size enables forklifts to enter the front and back to accommodate large sculptures.

Located just across the street from The Saint John's Pottery, the Johanna Kiln was built primarily with recycled materials, reflecting an ongoing commitment to sustainability and to the wise use of natural resources. Named in honor of S. Johanna Becker, OSB, the new kiln was dedicated on October 12, 1994.