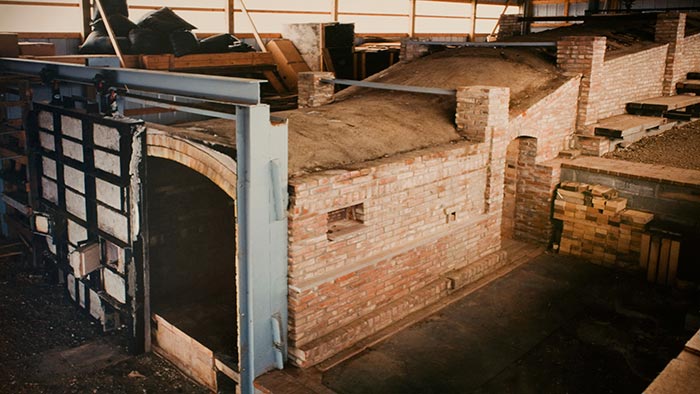 A massive noborigama (multi-chambered climbing kiln), the Johanna Kiln was designed by Richard Bresnahan and named in honor of his mentor, S. Johanna Becker, OSB. The 87-foot-long brick structure consists of a front chamber, a glaze chamber, a Tanegashima chamber with nine pairs of stoking portals, a long substerranean flue, and a chimney.

The first chamber is loaded with unglazed pieces and fired to allow for the accumulation of a natural ash glaze surfacing from the wood fuel and firing process. The fire then moves consecutively through all three chambers, or 1,600 cubic feet of interior space, making efficient use of fuel and minimizing waste heat.

The second chamber, or glaze chamber, is loaded with glazed pottery. The chamber is carefully brought up to temperature to allow for special effects such as hair's fur glaze streaking as part of the extended firing and cooling timeframe. This glaze firing technique is not otherwise obtainable in traditional gas or electric kiln firing practices.

Finally, the unique Tanegashima chamber has eighteen stoking windows in the roof of the kiln. Wood is stoked downwards into the open spaces separating ten rows of kiln shelves and clay works. This creates an environment where large amounts of wood and flame are in continuous contact with the pottery, generating unique flame patterns onto each ceramic surface.