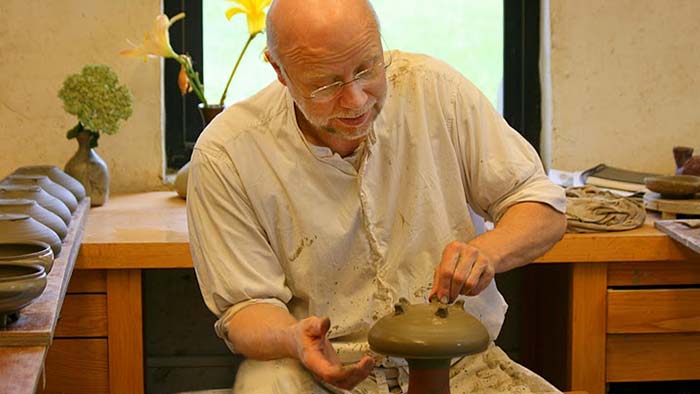 Richard Bresnahan directs a pottery studio on the campus of Saint John's, a Benedictine abbey and university in the woodlands of central Minnesota. Originally from Casselton, North Dakota, where his father ran a grain-elevator company and his mother raised a family of six, Bresnahan (b. 1953) is unapologetic about this rural Midwestern roots.

Richard Bresnahan secured an apprenticeship with the Nakazatos, a Living National Treasure pottery family in Karatsu, Japan. Bresnahan's apprenticeship with the illustrious Nakazatos lasted nearly three-and-a-half years, and through them he absorbed the traditions, techniques, and reverence for clay that permeated every aspect of their daily lives.

Rather than ordering materials from a catalogue as he had done in Minnesota, he dicovered that it was possible–even preferable–to excavate local clays and to wash away their inherent impurities. He also found out how to make glaze from ash and then how to apply the solution quickly and evenly to greenware.

Bresnahan was encouraged to think critically about kiln design and to consider how structural alterations might induce better results. "The verve of 16-hour days," says Bresnahan, "and of doing everything from sweeping the floor and making tea to digging clay and building kilns provided me with a holistic approach... and a deep respect for indigenous systems."

Upon returning to the United States in 1978, Bresnahan accepted an invitation from Saint John's to become the school's first Artist-in-Residence and established The Saint John's Pottery. Next, he located a deposit of clay nearby and had 18,000 tons of it stockpiled behind Saint John's Preparatory School. He then began the construction of a new wood-burning kiln.

Richard Bresnahan's inaugural firing of the Johanna Kiln, named in honor of S. Johanna Becker OSB, occurred in October 1995. The stunning results became the focus of First Fire, a special exhibition the following year at the Minneapolis Institute of Art. Since then, the Johanna Kiln has been fired nearly every other year, typically in the fall.