Body of Clay, Soul of Fire 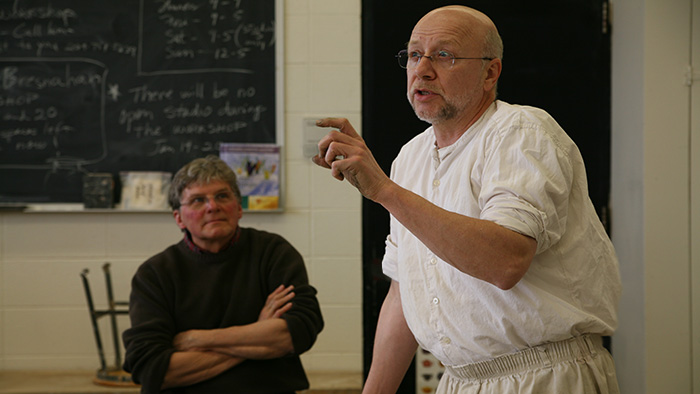 Richard Bresnahan's training in Japan came about through serendipity. He studied with art historian S. Johanna Becker OSB, who obtained his apprenticeship with Nakazato Takashi in Karatsu. That the young Bresnahan lived and worked in such an environment–rich in tradition, technique, and Japanese culture–makes him a very fortunate man indeed.

In 1993 and 1994, Bresnahan built a massive wood-burning kiln on the campus of Saint John's University in Minnesota, which he named the Johanna Kiln after his mentor. The very size of the large kiln, with its innovative flame flues and water channels, dwarfs all other American kilns and presents a challenge for other potters interested in wood firing.

Building the kiln within a dedicated religious and academic environment also gives Bresnahan the opportunity to offer apprenticeships and promote community outreach. His detailed research into using local seeds and hulls as glazing materials supports the idea of ecological conservation and diminishes the dependence on industrial chemicals.

He creates both traditional and nontraditional forms–jars, bowls, pitchers, platters, vases, and teapots–all splendidly designed and enhanced by the wood ash deposited during the firing. This marriage of art and technique, the result of his extensive training, has led Bresnahan to develop an intimate appreciation for natural colors and textures.

His art clearly falls within the rich tradition of American pottery, for his style is at once simple and profound. Like another Saint John's artist, the renowned novelist J. F. Powers, whose clear prose belies the effort that went into its making, Bresnahan creates pots that are deceptively natural and unpretentious but with a discernible air of great accomplishment.

Such leaders stand out above the rest and can be identified by their unique vision, singular knowledge, or stylistic influence. Bresnahan's 87-foot-long, wood-burning kiln is the largest in America and its 37-foot-long, backpressure tunnel is widely acknowledged as the first of its design. Potters from near and far participate in his firings and community events.

In this way, information about the modern use of this ancient art is spread and interest in pottery making is generated. As both an artist and an ambassador for the natural environment, Bresnahan takes his place as one of the preeminent potters in contemporary American ceramics.