A Passion for Pottery 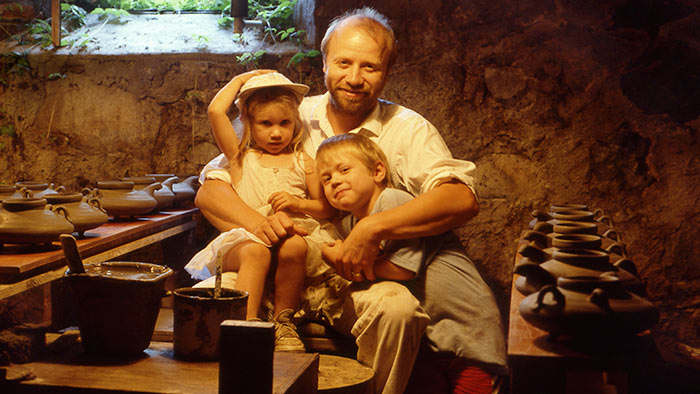 Admirers of the pottery crafted by Richard Bresnahan can't seem to agree on its origins. Bresnahan, a 1976 graduate of Saint John's University who has served as director of The Saint John's Pottery since 1979, is definitely American: He was born in Casselton, North Dakota and attended Saint John's Preparatory School.

But he spent his senior year in college and three years after that in Karatsu, Japan, on the island of Kyushu, as an apprentice with Takashi Nakazato. The Nakazato family have crafted pottery for 13 generations and are known as a Japanese National Living Treasure family.

"[Americans] will sometimes say, 'Richard Bresnahan makes Japanese-style pottery,' and then the Japanese who [visit the studio] say, 'Boy, Richard, you sure make American-style pottery,'" Bresnahan admits. What does the artist himself think? "I say it's Minnesota pottery," he says.

Bresnahan praises college faculty, particularly S. Johanna Becker, OSB, of Saint Benedict's Monastery, who made the connections for his Japanese apprenticeship. "There are these moments [at small colleges] when a university teacher can almost [be] like a wing covering a young bird," Bresnahan says.

But when he returned to Collegeville, Minnesota in 1979, Bresnahan spread his own wings. Saint John's University agreed to help him set up a totally indigenous pottery studio, with the agreement that sales of the work would sustain The Saint John's Pottery after the first two years.

Bresnahan and his wife, Colette, live with their children in Avon, Minnesota. He credits his wife, an accomplished head nurse, as indispensable in his life and work. "I've gotten tremendous accolades as an artist," he says. "But if you don't have a great partner to walk through life with, you're miserable." Rest assured that Richard Bresnahan is far from miserable.