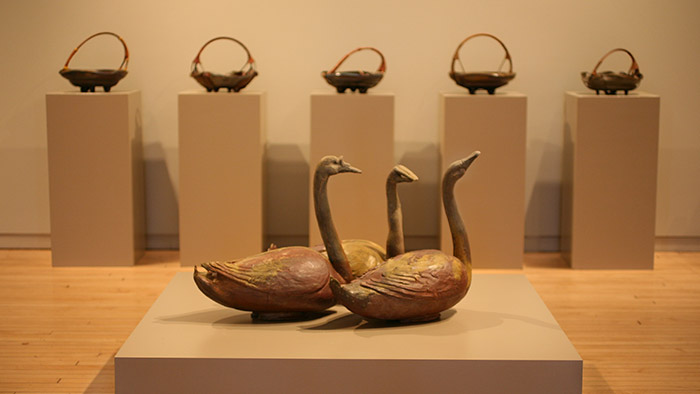 A selection of photographs illustrates the wide-ranging voices, spoken through sculpture and pottery, who have participated in the stewardship minded vision of Richard Bresnahan.  Accompanying the visual presentation are essays and poems written by authors and artists who have participated in wood firings or the daily life of the studio.  Together they describe the unique community that has taken root at the Saint John's Pottery over four decades.

Minnesota Potters: Sharing the Fire by Mark Lambert and Janet Koplos (Anoka-Ramsey Community College, 2012): Accompanied by a travelling exhibition and workshop series, this exhibition catalogue invites a rare view into the lives and the work of eight prominent Minnesota ceramic artists, including Richard Bresnahan and Steven Lemke.

The one-of-a-kind effort to encourage, record, and share the rich history of ceramics in Minnesota is made possible in part by multiple Folk and Traditional Arts Grants from the Minnesota State Arts Board received by Anoka-Ramsey Community College and coordinated by art faculty member and ceramic artist Mark Lambert.

Presenting one of the largest groupings of contemporary ceremonial teabowls in the United States, this travelling exhibition and catalogue was organized by ceramicists Robert Fornell and Rick Maheffey and features wood-fired work by Artist-in-Residence and Master Potter Richard Bresnahan.

Stoked: Five Artists of Fire and Clay by Dr. Matthew Welch (Saint John's University Press, 2010): This stunning full-color exhibition catalogue reviews recent work by Richard Bresnahan and four former apprentices who have worked with Bresnahan and The Saint John's Pottery since it was established over thirty years ago.

The catalogue explores a range of American ceramics: from the robust stonewares of Bresnahan, Flicker, and Johnson to the whimsical redwares of Earp and the elegant sculptures of Meyer. Several essays reveal each artist's search for identity and the cross-fertilization that occurs when creative people are mindful not only of the past but of generations to come.