The Chapel Trail begins and ends at Lake Sagatagan's beachfront, skirting the shores of the lake to reach the Stella Maris Chapel. The route is filled with stone bridges, reverent statues, tall oak, pine, maple, birch, and tamarack trees, and an abundance of Minnesota wildlife. The scenic woods and views of the lake make this trail one of the most beloved routes in Minnesota.

Built in the summer of 2015, the chapel trailhead sits along the shore of Lake Sagatagan. Monks and volunteers brought white pine from the Abbey Arboretum up the North Shore to the North House Folk School, to build the timber framework. The framework was transported back to Saint John's and constructed into the chapel trailhead. Built as a place for gathering, reflection, and commemoration of the Chapel Trail, the trailhead has already become a favorite gathering spot for visitors. View photos of the building of the trailhead on the Outdoor U Facebook page!

The statue, installed in 1956, celebrates Kateri Tekakwitha, the first Native American saint and martyr. Formerly located outside of the St. Olaf Church, the statue of Saint Kateri was gifted to Saint John's after the St. Olaf Church burnt down in a fire in 1953. Ever since, the statue has overlooked Lake Sagatagan and greeted generations of visitors on their way to the chapel. Learn more about Saint Kateri.

Named by the monks in honor of a large fish caught off the shore in the late 1890s, Pickerel Point offers a beautiful scenic resting spot to enjoy the view. In 2009, stone benches and a descending stone staircase were installed to offer hikers a place to enjoy the beauty of the scenery and prevent erosion along the shore.

In 1872, the Stella Maris Chapel was built to honor Mary, the Mother of God. It was named Stella Maris, which means "Star of the Sea." When it was built it was situated on an island, but since then the water level has turned the land into a peninsula. In 1903, the chapel burned down in a lightning storm. It wasn't until 11 years later that a new chapel was built. There were plans for a bell tower and a meditative fountain, but these features were never added. Years, vandalism and neglect led to renovations in 1943, 1989, and 2007. The devotional chapel has become a landmark to Saint John's campus, and a scenic attraction and destination on the chapel trail for many visitors. 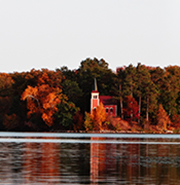