Growing up in Watertown, South Dakota, Sydney Walker always had a keen interest in education – largely because her parents are both teachers. She came to the College of Saint Benedict, where her mom, Tricia (Koob) Walker, was a 1993 graduate, and started out on the same career path. But going to CSB and Saint John’s University quickly broadened Sydney’s worldview.

“I’ve always had a passion for learning – I think my parents have instilled that in me since I was little,” said Walker, who is finishing her junior year as a political science major. “I knew I could create an inclusive classroom myself, but it is hard for a single-classroom teacher to have a broader impact on the education system. Over time, I realized my influence could be broader from a public policy level.”

Very soon she will have opportunity to develop that influence as the latest on a short list of Saint Ben’s Truman Scholars, and having accepted a summer internship with the U.S. Senate Committee on Indian Affairs.

On Thursday, April 14, Walker was announced as one of 58 members of this year’s class of Truman Scholars. The awards, named after former President Harry S. Truman, is designed to support the call to public service. It includes $30,000 in funding to assist with graduate studies as well as leadership training, career counseling and/or special internship and fellowship opportunities within the federal government.

Walker received notification on April 6 during a surprise informal ceremony in Simons Hall, home to the CSB and SJU Political Science Department.

“I’m still trying to process it all,” said Walker, who was feted with balloons and giant frosted cookies with her name on them, as well as personal congratulations from the transitional presidents of CSB and SJU, Laurie Hamen, J.D., and James H. Mullen, Jr., Ed.D., respectively. 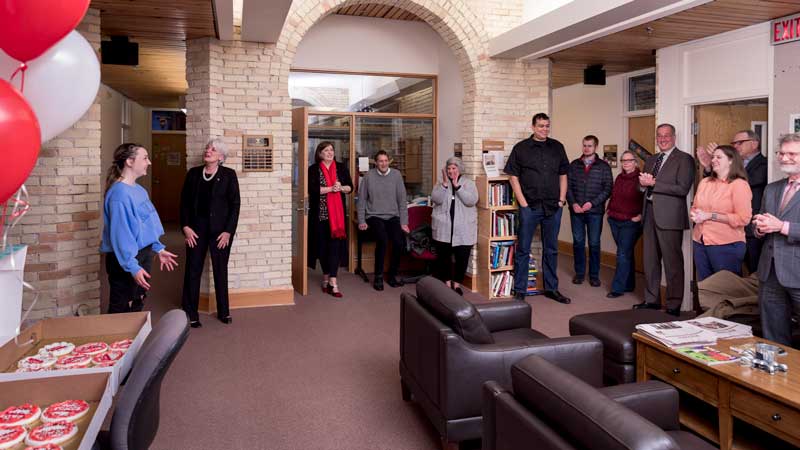 Coincidentally, Brian Bruess, Ph.D., the incoming first president of both institutions, also was on campus for his initial visit, attended the announcement with Hamen and Mullen, and chatted with the honoree.

“It was a big 24 hours,” added Walker, who received her internship invitation the day before she learned she’s become the sixth Truman Scholar in CSB history. There have been three Truman Scholars at SJU.

“This means we are at the top of the scale in academic development,” Hamen said. “You go to a big school and you might have fabulous faculty members but they don’t know the students. If you go to a smaller institution than Saint Ben’s and Saint John’s, the instructors might know the students but they don’t have the access to the highest levels of government. I think we have an incredible combination of big-school advantages in a small-school environment. Our faculty can take you as far as you want to go.”

Serving others – and maintaining a 4.0 GPA

Walker, who is minoring in economics, is part of the Bonner Leader Program (BLP) at CSB and SJU, which provides students the resources and ability to engage in service to their communities. She also works as an office assistant in the CSB+SJU Political Science Department.

“We’ve had a surprising success rate within our department and other departments as well,” said Dr. Claire Haeg, a political science professor in the department since 2005. “We have really wonderful, civically-engaged students, and that means that we are developing leaders – Bennies and Johnnies – who go on to do amazing work in the public sector.” 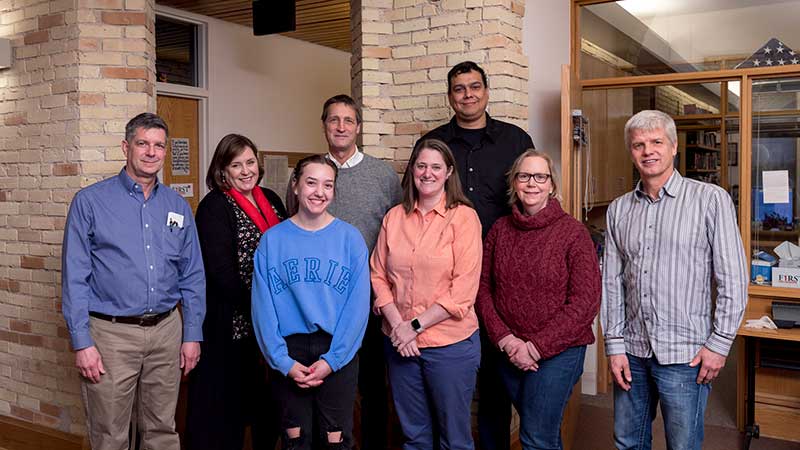 Soon after Walker arrived on campus, Haeg introduced her to Dr. Phil Kronebusch ‘81, professor of political science with CSB and SJU since 1992, who is coordinator of competitive fellowships.

Through BLP, Walker has worked consistently with Upward Bound, a tutoring and mentorship program for first-generation and low-income high school students. She said working with a diverse group of students has broadened her understanding of the educational system and fuels her interest in improving it for students of all backgrounds.

“There was a long weekend where the (CSB and SJU) students got to go home Thursday night – they didn’t have class Friday,” said Chris Young, Upward Bound director for CSB and SJU. “Sydney’s got a four-hour drive to get home. But I had a student who said they had something due at midnight and they really needed help. I put out the call to my tutors and Sydney committed to driving all the way home and then working with that student for a couple hours late that night via Zoom. Would you have done that as a college student? A lot of people would’ve been focused on themselves at that point. But she’s very dedicated and creates relationships with her students. They love her. She not only tutors them but she’s an important mentor, too.”

This summer on Capitol Hill, during an internship that will be supported in part by a fellowship for the Fleischhacker Center for Ethical Leadership in Action, Walker looks forward to having mentors of her own.

“I think a lot of deciding where I want to go and what I want to do next will depend on my experience there,” she said. “That could shape my interests and passions for where this kind of work can take me. That might be working in the Midwest broadly or working on Capitol Hill, I don’t know. I’d love to work with the Department of Education or the Bureau of Indian Affairs. I guess it will depend on what opportunities arise and where I think I’ll be able to do the most good. I don’t think I can say where I see myself in 10 years because I hope a lot of changes have been made between now and then. Who knows? Maybe that will take me into politics someday?”

Whatever she does, Walker has an interest in helping the Indigenous populations, which are prominent in her home state – as in Minnesota.

“Growing up in South Dakota, I had Indigenous classmates, but I didn’t really know who they were,” Walker said. “Unless they would share it, it’s not something you would know because that’s kind of personal. But as I got older, I realized the school wasn’t really teaching any Indigenous history or culture. It surprised me because we have a pretty large indigenous population.”

As a senior in high school, she studied South Dakota American Indian Culture in a college-level course that is part of the educational track to becoming a teacher.

“These future teachers in my class were treating it as a joke,” Walker said. “That was so not OK with me, because I knew I had Indigenous classmates and knew there would be Indigenous students in their future classes, too. That started me on a path toward trying to make education more inclusive.”

At CSB and SJU, institutions with connections to Native American boarding schools, she has continued to take college classes that increase her understanding of Indigenous culture and policies.

“I am very lucky to be studying at CSB and SJU at a time the institutions are beginning to repair relationships with our Native Nation Neighbors,” Walker said. “The opportunity to be part of the reparations process has made my time at CSB and SJU special and deepened my interest in improving Indigenous education.”

The Truman scholarship program was established by Congress in 1975 as a response to a request made by Truman shortly before his death in 1972. He asked that a living memorial dedicated to inspiring the next generation of public servants be created in lieu of a brick-and-mortar statue or monument in his honor.

The first group of Truman Scholars – which annually includes at least one student from each state – was named in 1977, a class that included Janet Napolitano, who later became Governor of Arizona (2003-09), Secretary of Homeland Security (2009-13) under President Barack Obama, and president of the University of California (2013-20).

Through 2022, there have been 3,442 Truman Scholars. Other prominent names among them through the years include Chris Coons (1983; U.S. Senator from Delaware), Susan E. Rice (1984; 24th National Security Advisor, U.S. Ambassador to the United Nations and former Assistant Secretary of State), Neil Gorsuch (1987; associate justice of the Supreme Court) and several members of the U.S. House of Representatives.

This year’s scholars were selected from a pool of 705 candidates nominated by 275 colleges and universities. Kronebusch arranged practice interviews with former Bennies who earned the honor so she would be prepared for the real thing. 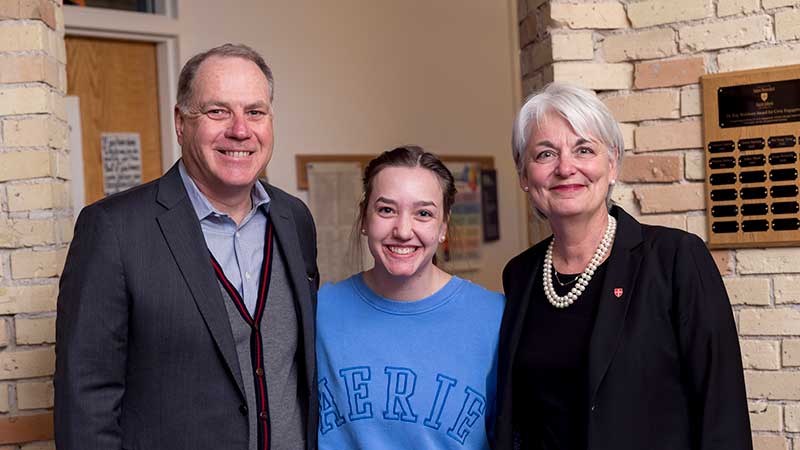 Mullin, who also became a Rhodes Scholar, is now a product marketing manager with Sendwave, an organization based in Washington D.C. that facilitates the transfer of money to Africa and Asia.

Hertel Buckley earned a master of public affairs at Princeton, a law degree at Stanford, and is currently Global Head of Philanthropy at Värde Partners, a global alternative investment firm based in Minneapolis.

Dahm earned a masters in law and diplomacy from Tufts University before getting her law degree at Cal-Berkeley. She’s now a trial attorney and partner in a California law firm, Bonjour, Thorman, Burns & Dahm.

McGlinch earned a master of public policy and a law degree at Harvard, and since 2017 has been senior counsel to the Democratic staff of the U.S. House of Representatives Ways and Means Committee.

Perhaps in another 10 years, Walker will make the list more impressive with her credentials.

“I’m someone who likes to have a big goal,” she said. 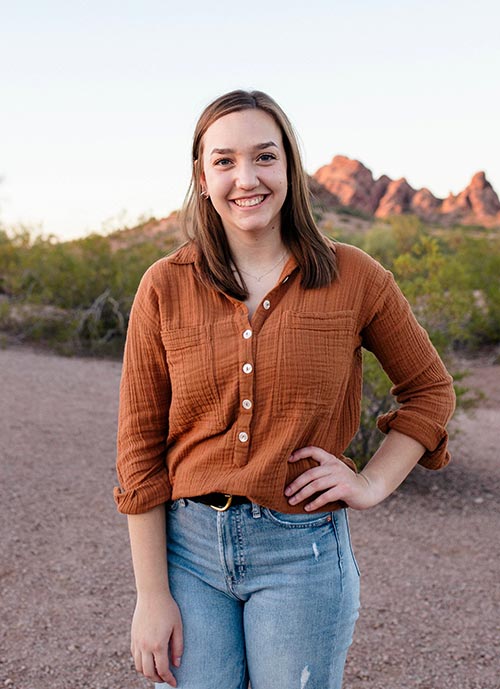 Sydney Walker is a junior political science major from Watertown, S.D. She will serve an internship this summer with the U.S. Senate Committee on Indian Affairs. 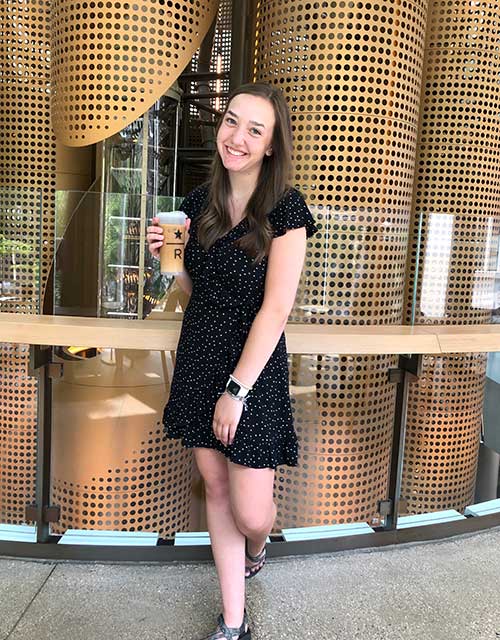 Sydney Walker is a volunteer with Upward Bound, a tutoring and mentorship program for first-generation and low-income high school students. During the pandemic, she also sewed more than 300 face masks. A second-generation Bennie, she has a 4.0 grade-point average as a political science major with an economics minor.