Gen. Paul Nakasone, a 1986 Saint John’s University graduate, will present the 2022 Eugene J. McCarthy Lecture at 7 p.m. Thursday, Oct. 20 at the Stephen B. Humphrey Theater, located on the SJU campus.

Nakasone will address the roles U.S. Cyber Command and the NSA play in securing the 2022 midterm elections and other cyber-security threats. The lecture, sponsored by the Eugene J. McCarthy Center for Public Policy and Civic Engagement, is free and open to the public. Registration and identification are required for this event. You can register for the lecture here.

An SJU graduate with a degree in economics, Nakasone received his commission in the Army through the university’s ROTC program.

Nakasone has held command and staff positions across all levels of the Army with assignments in the United States, the Republic of Korea, Iraq and Afghanistan. Prior to assuming his present duties, Nakasone served as Chief of U.S. Army Cyber Command from October 2016 through April 2018.

He served twice as a staff officer on the Joint Chiefs of Staff. In addition, he holds graduate degrees from the U.S. Army War College, the National Defense Intelligence College and the University of Southern California.

Nakasone has been a very active SJU alumnus, often hosting alumni and programs with the D.C. alumni chapter. In addition, during COVID, he commissioned two ROTC graduating classes, delivered the 2021 Saint John’s commencement address, received an honorary doctorate degree and was the recipient of an Alumni Achievement Award from SJU in 2016.

Nakasone and his wife are the proud parents of four children, who form the nucleus of “Team Nakasone.”

The annual McCarthy Lecture carries forward former U.S. Senator and presidential candidate Eugene McCarthy’s deep commitment to the ideals and principles of democratic self-government. It seeks to inspire a new generation of young people to pursue fresh ideas, to challenge the status quo, to effect positive change in their communities and, like McCarthy himself, lead with honesty, integrity and courage. 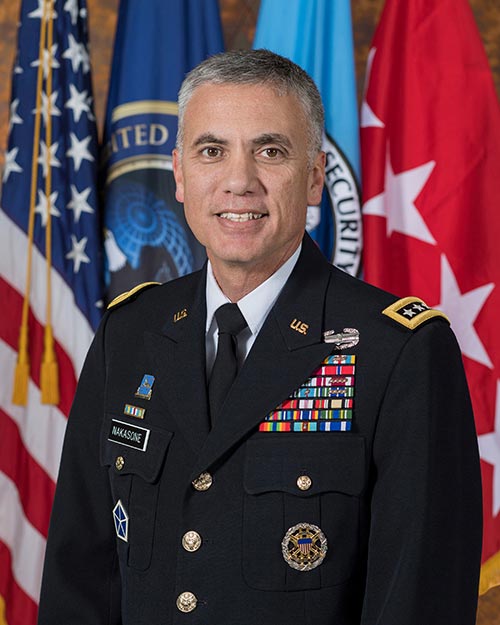