The power of the Johnnie network yielded a record-high total when it came to dollars raised for the Saint John’s University Student Fund during this year’s Give SJU Day event on Wednesday, Nov. 16.

“Scholarships are so crucial right now and they remain our top fundraising priority at Saint John’s,” said Ted Kain ’12, SJU’s director of annual giving. “I’m incredibly grateful for the generosity of our donor community and the way they continually show their support for making the Saint John’s experience possible for so many outstanding young men.”

For the fourth-straight year, donors came from all 50 states – again unlocking a $10,000 gift from an anonymous alumnus. In addition, College of Saint Benedict and SJU President Brian Bruess and his wife, Carol, issued the Presidential Donor Challenge, just as they did for Give CSB Day in October - pledging $10,000 if the day’s donor goal was met.

“That was amazing,” Kain said. “We are so lucky that Brian and Carol recognize the importance of scholarships at both schools and have been so supportive. They’ve really connected with our donor and alumni communities and they understand how important days like this are when it comes to engagement and pride."

Second in total donors was the class of 2010 with 49. Eighty-four percent of the total donor pool was made up of alumni.

Class volunteers play a pivotal part of Give SJU Day success by offering class matches, recording personal plea videos and conducting personal outreach to their classmates encouraging them to participate.

Give SJU Day marks the biggest giving day of the year when it comes to supporting Student Fund scholarships. But while the day itself is over, gifts can always be made to the SJU Student Fund.

“We continue to receive such generosity from our alumni, parents, friends, students and staff,” Kain said. “I’d just like to say thank you to everyone out there who continues to help support Saint John’s students.” 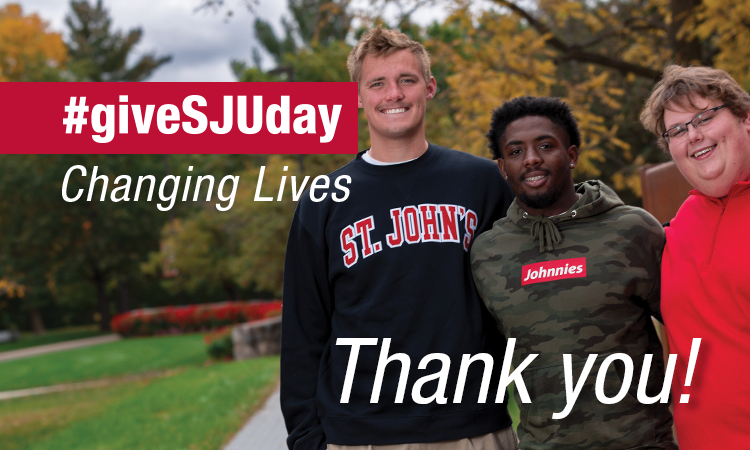