Erik Benson grew up in De Graff, Minnesota, about 75 miles west of the College of Saint Benedict and Saint John’s University. As a teen, he moved to Minneapolis so he could graduate from the Perpich Arts High School. He then went to the Minneapolis College of Art and Design before moving to New York to pursue a career as an artist.

“I was in New York for two years, painting and cooking my way to make a living, when I made a decision to apply to three of the best grad schools to see if I would get in and let fate decide my future as a 23-year-old,” Benson said.

He applied to the Rhode Island School of Design (RISD), Yale and Columbia, gaining acceptance to the first two. He chose RISD, in part because of its commitment to new individual studio spaces for graduate students. He completed a two-year Master of Fine Art program in 2001, but it was also during that time that he developed an allergic reaction to oil-based paint and so switched to acrylics. That twist of fate set him on an award-winning course that ultimately led to a McKnight Fellowship in 2016, more than a dozen solo exhibitions across the U.S. and in Germany and Spain, and dozens of group exhibitions in the past 20 years.

“At first, I didn’t like acrylic paint, so I developed this technique of painting on glass and then peeling the shapes off and collaging them onto canvas,” said Benson, who lives in Minneapolis. “With oil painting, there was a means to an end that made sense to me. Acrylics had this plasticity that didn’t make sense, but it’s changed a lot over the years. You can really do the same things now that you would have with oil paint.”

While acrylic paint may have become versatile, no one can replicate Benson’s touch with it. His work is informed by architecture and everyday objects found in urban landscape, and he considers his paintings to be “analog,” with a unique visual language expressed through thinking, seeing and making.

“It originally started as 1-to-1 painting of things on glass, then cutting it out and transferring it onto the paintings,” Benson said. “I dealt more with playgrounds or construction sites, imagery that had a 1-to-1 relationship with how it was made and seen. That process of seeing and making and thinking has become really important to me over the years. I try to make something in painting and out of paint the way I see it and break it down in my mind.

“They’re paintings, but I make them with these other things that I collage in there. There’s a lot of discovery that happens.”

As an example, one of his paintings (which bears the name “Maker”) appears as a collage of a barren tree with pine-tree air fresheners hanging from the limbs. A rug, held in place with duct tape, covers a horse-like figure with human legs, a crutch, boots and even a stray Vans slipper.

Other works include smiley-face stickers, Post-it Notes and price tags, balloons and cement blocks, and some that feature cracked vases held together by whatever will adhere to them. The paintings in “Maker,” he said, are like “exquisite corpses.”

“I take things and make other objects out of them,” he said. “I like to take things out of context and make something new. There’s some humor. There’s some darkness. And there’s a lot of leftover feelings from having two kids during the pandemic. I like light-heartedness in my work.”

He believes his process has been influenced by his background, his early “real” job as a cook.

“The work I do has similarities with culinary arts,” Benson said. “Preparing to work on my paintings is like setting up to cook for the night. I’ve got to lay things out and there’s a lot of process involved.”

He also has two daughters, ages 6 and 3, who influenced his work by their presence during the COVID-19 restrictions.

“I can’t think of anything else that was so transformative, that everybody in this country and all over the world experienced together at the same time,” Benson said. “It’s changed all of us, and I think some of that comes through in these paintings. There’s a perspective you get and a level of detail when you see them in person that doesn’t come through in pictures. I hope people see that but, more than anything, I hope they see the fragility of things.” 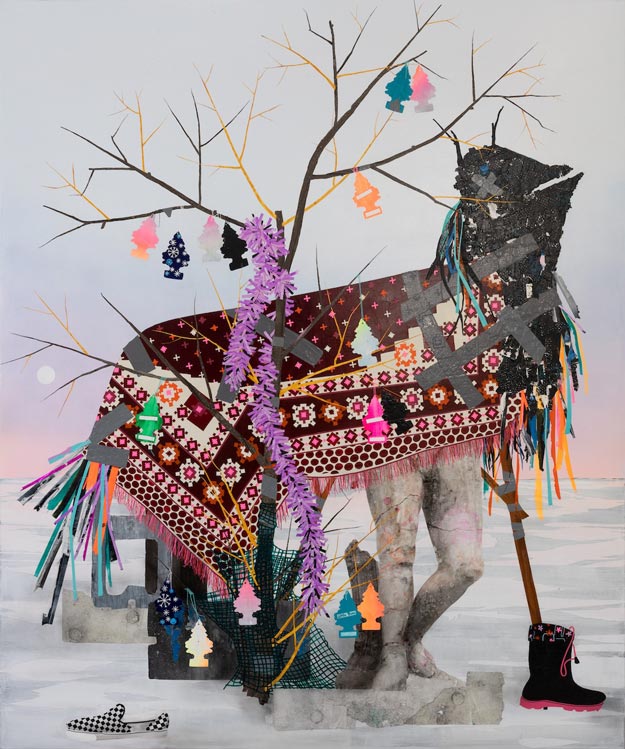 Erik Benson's title work "Maker" will be on display among other acrylic collage paintings from Jan. 17 to March 17 at the SJU Art Center. 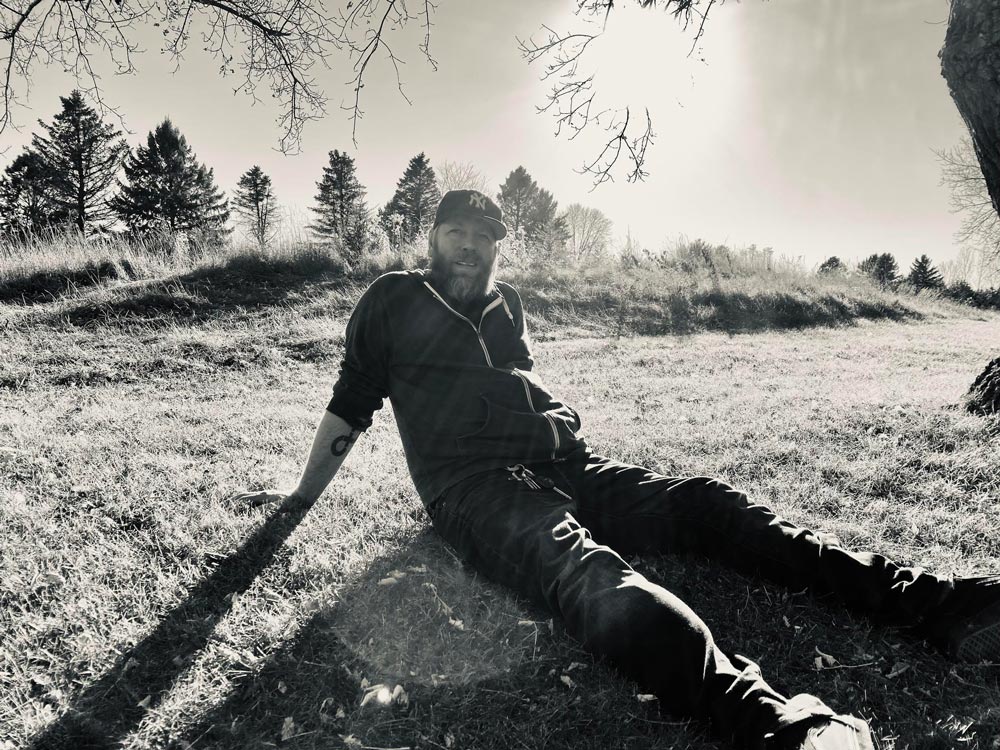 Erik Benson's acryllic painting and collage work will be on display from Jan. 17 to March 17 at the Saint John's University Art Center..