More than 200 years have passed since Jane Austen conceptualized Pride and Prejudice, a novel that would skewer the dependence of women on marriage in English society at the time to pursue favorable social standing and economic security. Published in 1813, the story has withstood the test of time, 17 different screen versions and countless adaptations.

Adapting is central to the mission of Aquila Theatre, which will diversify Austen’s classic on Nov. 5 in the Stephen B. Humphrey Theater at Saint John’s University. Six actors, under the direction of Desiree Sanchez, will perform all the characters, changing personality often and quickly. The set is designed to make that process fluid, Sanchez said, but “the actors really have to challenge themselves to be able to believably switch.”

While Sanchez added that she and her New York-based company left the script virtually untouched from the way Austen intended, their performance will challenge perception with actors of color playing white roles.

“We try to show a different perspective than what is normally shown,” said Sanchez, executive artistic director for Aquila since 2012 – including previous stops at Saint John’s for Fahrenheit 451 in 2013 and Mary Shelley’s Frankenstein in 2018. “That may mean changing the gender of a famous character. In Sherlock Holmes, we had someone play that by a woman as a woman. It opens the story and the character in a new way and can resonate with our culture. Many of these stories were written in a time when we might perceive women didn’t have a voice, or people of color didn’t have a voice.”

During a forced hiatus because of the pandemic, Sanchez researched classical works to find more that could speak to different demographics. Pride and Prejudice fit the bill.

“In what was written (in the early 1800s), it’s easy to feel like people of color didn’t exist, when of course that’s ridiculous,” Sanchez said. “Of course, they did. They were very prevalent in art and literature, it’s just that they got erased or the pieces involving them didn’t get passed down. There were a lot of bi-racial and mixed families in England at the time of this story and the rules of entailment (restricting inheritance to male lineage) really didn’t change. So, we didn’t have to change the story at all. But we also didn’t want to do color-blind casting.”

Sanchez said shaping the production was a collaborative process with the actors.

“There are certain roles that it wouldn’t have made sense for an actor of color to play,” she said. “But then we found other roles that absolutely could be played by a person of color. That was an interesting conversation. We had one situation where an actor of color said, ‘I won’t buy that a woman of color would say that to another woman of color.’ And we were like, ‘You’re right.’ So, we switched the presentation to make it make sense. That sort of sensitivity is something we should all look at as we move forward in this world of trying to make the classics and storytelling more integrated.”

Aquila’s 2022-23 tour began Sept. 30 in California and runs through March 16 in Norfolk, Virginia. Pride and Prejudice will play Nov. 3 at Storm Lake, Iowa, before coming to Collegeville. Those will be the company’s only appearances in the five-state region.

At some stops, Aquila performs two different plays on subsequent days. That was the case the last time the company visited the College of Saint Benedict with Othello and The Man Who Would Be King in 2004 and with their first appearance at the Benedicta Arts Center in 2001 with Cyrano de Bergerac and Much Ado About Nothing.

That was before Sanchez had anything to do with Aquila. She grew up in Mystic, Connecticut, and attended the prestigious Walnut Hill School for the Arts before joining the Boston Ballet. Later, she worked with modern dance choreographers in Los Angeles and New York before joining the corps de ballet at the Metropolitan Opera.

“I think I always gravitated to pieces and choreographers who could tell a story,” Sanchez said. “I loved the opera because it mixed everything in, the storytelling, the dance, the visuals and the music. It was beautiful. When I wasn’t dancing at the Met, I would sit in a box and close my eyes and reimagine what it should look like.”

And then she met Peter Meineck, who founded Aquila in 1991 in London, moved to the U.S. in 1994, and needed someone to help foster movement in his productions. They soon developed a relationship and were married within a year. Sanchez said she then got “sidetracked” with life, two children, and her husband wanted to branch into academia – later becoming a professor of classics at New York University. She was going to go to architecture school, a second love, but Peter increasingly didn’t have time to direct Aquila anymore and couldn’t find someone to take over – until he looked at his wife.

“How hard could it be?” Sanchez laughed. “I was trepidatious at first because I didn’t know how the company would perceive me.”

Her first directorial effort, Six Characters in Search of an Author (2010), was a hit.

“Then people were like ‘Oh, she can direct, actually,’” she said. “I picked up a lot from the actors and, because Aquila has a very physical presence, I’ve got loads of experience storytelling with a body on stage. Through the years, I’ve learned and grown and developed my style into what it is today.

“This was always something I was searching for, even though I didn’t realize it right off the bat.” 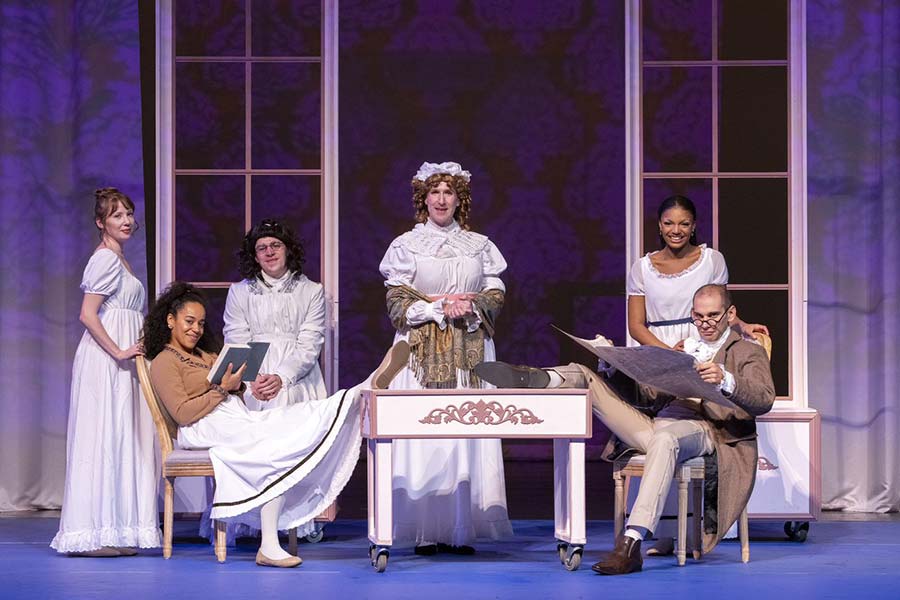 The Aquila Theatre cast for Pride and Prejudice includes (from left) Katie Housley (who plays Jane Bennet and Miss Bingley), Leda Douglas (Elizabeth Bennet), James Counihan (Mr. Bingley, Mr. Wickham, Mr. Collins and Mary Bennet), James Lavender (Mrs. Bennet, Mr. Gardiner and Lady Catherine de Bourgh), Elizabeth Belfast (Lydia Bennet, Georgina Darcy and Charlotte Lucas) and Conner Keef (Mr. Darcy and Mr. Bennet). Lavender is a veteran of five previous Aquila shows and has dozens of theatre credits since training at the Rose Buford College, a drama school in suburban London. Douglas, who has made many appearances in theatre and short film, began her career as a dance choreographer in Leicester, United Kingdom, and graduated from the Oxford School of Drama in 2018. Housley is a Canadian stage and screen actress who graduated from the University of Toronto and the Stella Adler Studio of Acting. Counihan is in his second tour with Aquila Theatre after receiving a BFA from Ithaca College. Keef is a Brooklyn-based Kentucky-born actor who received a BFA in acting from Western Kentucky University. This is the first professional theatre credit for Belfast, who received her BFA at Texas State University.

Pride and Prejudice is her 25th production. In addition to Sanchez and the six actors, the production team includes a stage manager, company manager, technical director, projections designer and costume designer.

“We’re an odd family, just as Jane Austen intended it to be,” Sanchez said. “She wrote about families that people either bristle against or enjoy. They were complicated times, as they are now. This story is so much about class, and the words are vague enough, that you really don’t have to change them to make them come from a woman of color.

“It’s a great show to come to if you just want to have a laugh – it is so fun, and that’s my favorite part of directing it,” added Sanchez, grateful for lightness after directing Macbeth and The Great Gatsby in 2021. “Last year, it was really dark and heavy. A Scottish play and Great Gatsby. It was hard on the soul. This is such a breath of fresh air. I haven’t laughed like this in so long. The actors are fun and they’re going for it. We’re telling the story. We’re not making light of it at all. We’re invested in the aspect of love and romance. The heart of the play is there, but we’ve really allowed the lightness and wittiness of Jane Austen to come through.”

Tickets, ranging from $8 for CSB and SJU students to $40 for regular admission, are available at https://www.csbsju.edu/fine-arts/performances. The performance is made possible in part by the voters of Minnesota through a Minnesota State Arts Board operating support grant, thanks to a legislative appropriation from the arts and cultural heritage fund.

Desiree Sanchez has been the executive artistic director for Aquila Theatre since 2012. In addition to experience writing stage adaptations and choreographing plays, she performed with the Metropolitan Opera Ballet during a 20-year dance career. 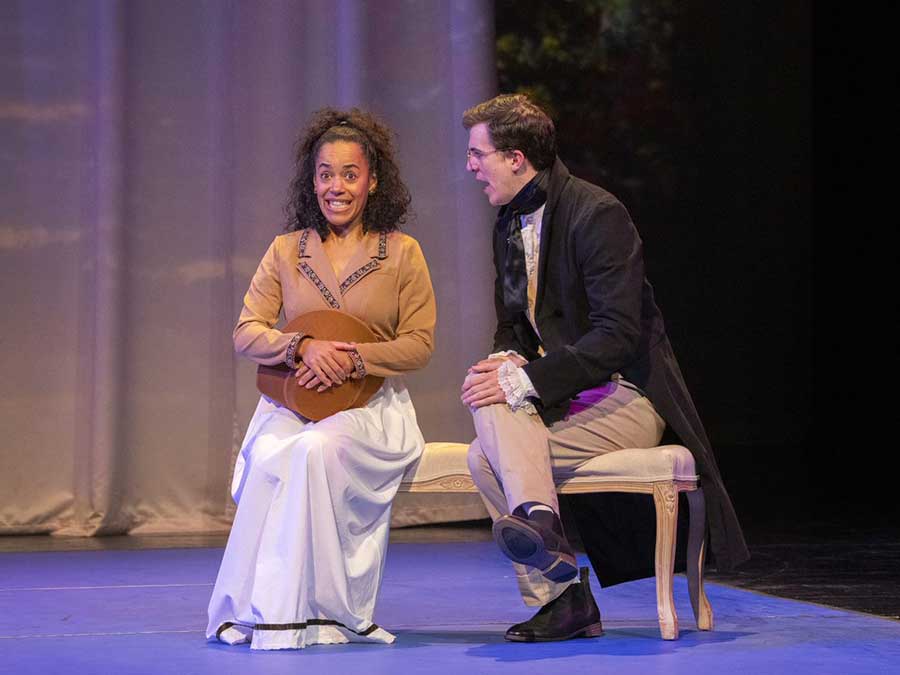 Elizabeth Bennet, played by Leda Douglas, displays an animated expression in response to a character played by James Counihan in Aquila Theatre’s production of Pride and Prejudice. The Jane Austen story will be performed Nov. 5 at Saint John’s University.