Sailors on the high seas might consider knot-tying at art form. It’s certainly part of the process for Liz Miller, a fiber artist who has probably tied more of them in the past 15 years than anyone in the Navy.

After receiving her bachelor’s in fine art from the Rhode Island School of Design, and her master’s from the University of Minnesota, launched a career producing large-scale installations for commercial and industrial spaces. Her creations were like giant mobiles, and they required countless knots to hold them aloft and in place.

Eventually, those knots and the way she’s been able to weave fabrics and reinvent uses for discarded pieces of the built environment (think parts of fences, bedframes and stove grates) with rope, cord, and other textile materials led to a new variation of her art.

The latest examples will be on display from Nov. 8 to Dec. 16 through “Anecdotal Architecture” in the Alice R. Rogers and Target Galleries Saint John's Art Center in Collegeville. Miller has been the subject of more than 30 solo exhibitions since 2009, including as a McKnight Fellow last year in Minneapolis and dozens of other shows across the country.

“I started in drawing and painting, then I moved to collage, and then the collage came off the wall,” said Miller, an instructor in the Minnesota State University-Mankato art department since 2005. “The installations started flat and wall-based and then I started suspending them with fishing line and different types of paracord. This work, with all the knotting elements, was sort of a result of me looking at all the knots I was tying. I’ve been tying thousands and thousands of knots for 15 years. So, the installation work led me back to doing pieces like those that will be displayed at Saint John’s.”

Her installation art is sometimes so big that perhaps only one piece would fit in a space like the SJU gallery. Many of the works she has created for Anecdotal Architecture are the size of a large painting and would easily display on a wall – even in a residential setting.

“Quite a bit of my career, the installations were the primary focus of my practice as an artist,” said Miller, whose work has hung in the Minneapolis Institute of Art and the Walker Art Center. “Recently, within the last four or five years, I’ve been focusing on these wall-based works. The armature is in the work – the metal and wood portions are all remnants of domestic consumer culture that have been cast off or discarded. These are things that end up at thrift stores or other places where you would find things second-hand. As I saw some of these items, I identified elements that were similar or that you saw again and again. I might use the headboards of beds or those cheap, plastic shelving units you might have used in a closet, and I take those and sometimes alter them with spray paint. I weave paracord and rope through them and recombine other materials to produce a topography that hopefully elevate these items and give them a new story.”

She said she tries to capitalize on structural elements and gravitates toward things that are porous that provide a framework for weaving. The rope and cord then introduce an “organic movement,” where the weight of the work goes beyond the armature to define it.

“It’s all these different vernaculars of found materials coming together,” she said. “There’s also an element with the rope and the cord that have different uses, from decorative to utilitarian. The textile material is incredibly strong. Even though it’s the soft material in the work, it’s stronger than some of the metal components.”

Miller lives in Good Thunder, Minnesota, where she drew artistic inspiration from the fences of the rural landscape. She said she’s interested in the intersection of what people consider “art” and what non-artists would call “craft-making.”

“I deal in abstraction, or non-objective work,” said Miller, who began her teaching career as a drawing instructor and, more recently, has been tapped to lead an installation art program. “There’s not a picture or a message that’s obvious. I hope there are multiple entry points the viewer can find. For the person who walks quickly through the gallery, or doesn’t have an art background, they might recognize the materiality of it, like ‘Oh, I have a bedframe like that,’ or they recognize another material element. Maybe they know about knotting and that might catch their attention. But I hope for the viewer that spends longer that they’ll see within the works a logic, or system or story that’s formed.”

Miller resists the idea that her works are a commentary on consumer culture, but it’s impossible to deny how she wishes to find new use for small architecture elements that become obsolete or easily discarded.

“I like to try to create some intentionality,” Miller said. “With a lot of non-objective work, I’ll hear people say ‘Well, the viewer can think what they want.’ I always feel like that makes it too easy for the artist. I want to create things that are a little difficult for people to comprehend. Sometimes the color pattern might not be entirely pleasing. There’s a tension or dissonance in parts of the work.”

And where there’s tension, there’s often a knot to pull the different parts together.

SJU gallery hours are 10 a.m. to 9 p.m. Monday through Saturday. Miller, who will appear at an artist’s reception from 5-7 p.m. Nov. 10, says she’s not sure how her art will evolve next but believes that it will.

“I believe as an artist that if you think you know exactly what you’re going to do, that’s when you’re in trouble,” she said. 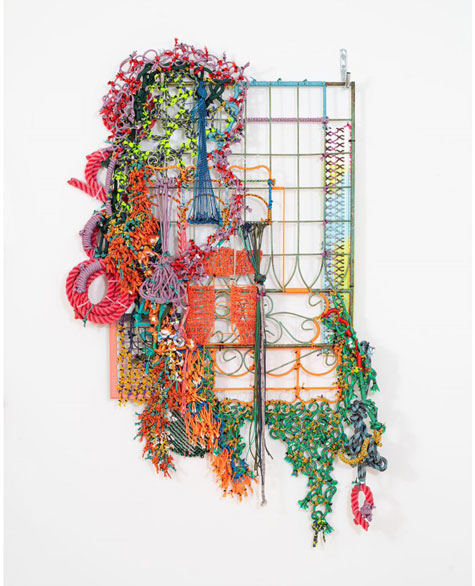 Above is an example of Liz Miller's fiber art creations that will be on display at SJU. 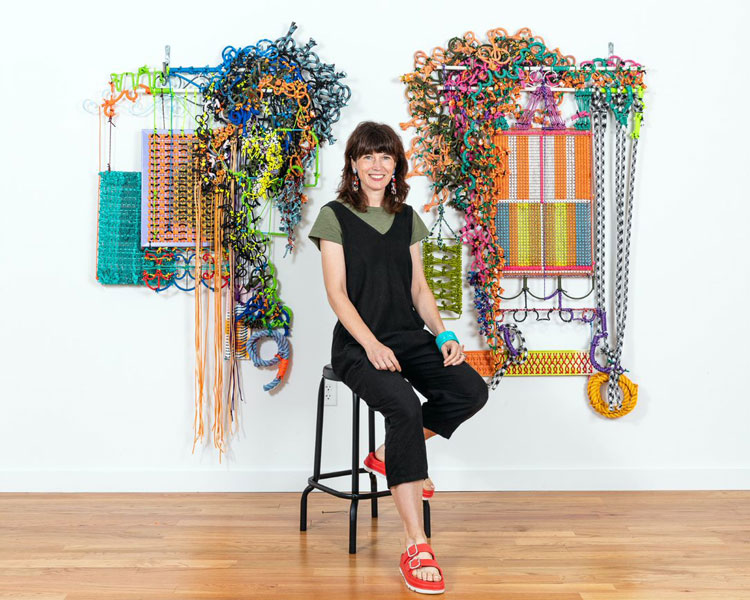 Liz Miller is a fiber artist from Good Thunder, Minnesota. Her exhibition "Anecdotal Architecture" will be on display from Nov. 8 to Dec. 16 at Saint John's University.