A Step Inside the World of an Artist 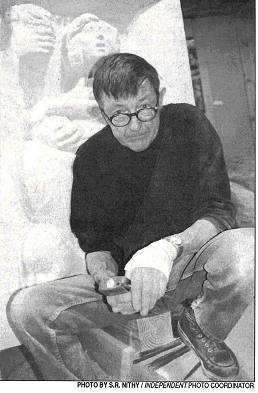 Artist-in-residence, Joseph O'Connell, is working to complete a piece based on a verse from the Gospel of Matthew.

A Step Inside the World of an Artist

Perhaps nothing is more intriguing than the mind of the artist. Where does the person get ideas? How are they formed? Who has influenced the artist? These are just a few of the many questions that a layperson wants answered when studying an artist.

I was fortunate enough to have the chance to get the answers to a few of my questions from College of St. Benedict artist-in-residence, Joseph O'Connell.

When I first approached O'Connell about this interview, he seemed a little tentative. He is on a tight time-line, trying getting his latest sculpture completed. However, when I explained that it was OK if he worked while I asked questions, he agreed.

O'Connell’s temporary studio is located in the middle of the art department atrium. On the outside walls of the studio are art pieces created by students of Sister Baulu Kuan, O.S.B. and Sister Dennis Frandrup, O.S.B. In addition, there are sculptures by Gary Grooters lining the walls.

One leaves this beautiful environment to enter O'Connell's studio, but entering is not a disappointment. When I ventured into the studio, the soft chinking sound of O'Connell's hammers against chisels intertwined with the equally soft sounds of jazz coming from his radio. I had already been to his studio, so I was prepared to encounter the many layers of fallen dust and rock. I was also ready for the many pictures of people, hands, legs and other such features tacked on the walls. Pictures which, O'Connell explains, "remind him of what is happening."

What I wasn’t ready for was the most prominent feature in his studio— the three huge slabs of limestone on which O'Connell has been sculpting for the past two and a half years.

They are the center attraction and they are O'Connell’s latest commission. However, it is not the immensity of the stones that is so impressive. Rather, it is the images that O'Connell has carved. The commission is for a Catholic community in Las Vegas, Nev., called Christ the King Community. A considerable amount of the sculpture is based upon the verse in chapter 25 of the Gospel of Matthew:

Two slabs depict scenes of forsaken people. O'Connell explained the Christ the King Community does a considerable amount of work with the poor and homeless. These two slabs also include references to the corporal works of mercy, some of which include visiting the sick, feeding the hungry, clothing the naked and visiting the jailed.

“The community also wanted something that didn’t depict Christ as royal, but rather, intimate," O'Connell said.

This intimacy is evident in the third stone slab which depicts Christ riding a burro. The figure faces its viewer with wide spread and welcoming hands. As with all of O'Connell’s works, there is an instant compulsion to touch and to explore.

One important factor for O'Connell was making this sculpture universal.

"This sculpture has no particular time or place," O'Connell said.

It is a piece of art that all generations can appreciate.

Joe O'Connell is much like his art. He has a very expressive manner about him. When one studies him, it becomes evident that he is very dedicated to his work. Most people who see him pass on the street or in the Benedicta Arts Center's hallways will notice the fine sprinkling of grey dust over most of his clothes and sometimes in his hair. However, no matter how busy or preoccupied he is, O'Connell always seems to find the time to say, "hello," and sometimes get in a quick bit of conversation. This friendliness and helpfulness pervaded throughout the interview.

"I don't know," he said, "I guess I don’t remember. Nothing really stands out in my mind, I guess it must’ve been something I read or something that I saw."

The memories came to him when I asked him when he began to sculpt. He explained in between delicate taps of the hammer against the chisel, that he began in 1950 or 1951. He said his first sculpture was out of a soft stone and that he used basic carpenter tools.

Another early sculpture he recalled was carved from a 10x10x2 piece of purple heart-wood. He was living with a family at the time and carved a statue of St. Francis as a gift for them.

Before sculpting he had been trying to paint and draw, so when he stated sculpting, he really had no idea how to do it.

O'Connell came into sculpting as his current medium through a little risk taking. An artist by the name of Norbert Smith suggested that O'Connell get a list of architects building churches and see if he could get a commission sculpting for them. He did get one, but it was to sculpt limestone, something he had never done before.

“I was young and, thank goodness, I was dumb! It didn't take me but a few months to complete the commission, but that just shows you how much I knew!" O'Connell said.

I asked him how he learned to sculpt in those few months.

"Well, you see, this isn’t that hard. It's very basic. You just need to pay attention to the stone and get a few how-to-do books to find the tools," O'Connell said.

I laughed, because I think many would agree that he possess a skill that goes beyond basic. When I asked him what his educational background was, he looked a little nervous.

“I don’t know if you should mention this," he paused from his work, "but I didn’t receive a formal education."

He stresses that he does not want to condone his education, and that times were much different than they are now.

“The trouble with the self-taught is that they talk about their teacher too much!” O'Connell added with a smile.

With that, he returned to his work. Despite O'Connell's lack of a formal education, he has had numerous learning experiences throughout his lifetime. Perhaps one of the most interesting and maybe influential experience happened when he was much younger.

O'Connell explained that as a young child, his father used to drop him off at the Art Institute of Chicago.

“This,” O'Connell said, “was how my father babysat me.”

"He'd drop me off at the museum and pick me up an hour or two later. All of this happened, of course, when the museum was much smaller than it is today,” O'Connell said.

This form of child-care must have influenced O'Connell greatly because he pointed out in his current sculpture that there are carvings intended for children.

"Children love to touch things and stick their fingers in nostrils and mouths. Most of my public sculptures have something low," he pointed to his current work and continues, "such as this one with the cat, the dog and the rat."

O'Connell is an artist and like other artists, he touches us with his work. Our community is very fortunate to have him amongst us, helping us see people, relationships and life in a new way.

If you are interested in other pieces by O'Connell, there are several on the St. Benedict's campus. They can be seen in the lobby of the Benedicta Art Center and the reception center of the Sacred Heart Chapel.

Or, if you should ever find yourself in the BAC art department, enter O'Connell's world and, if only for a few minutes, touch a few rock nostrils and mouths.