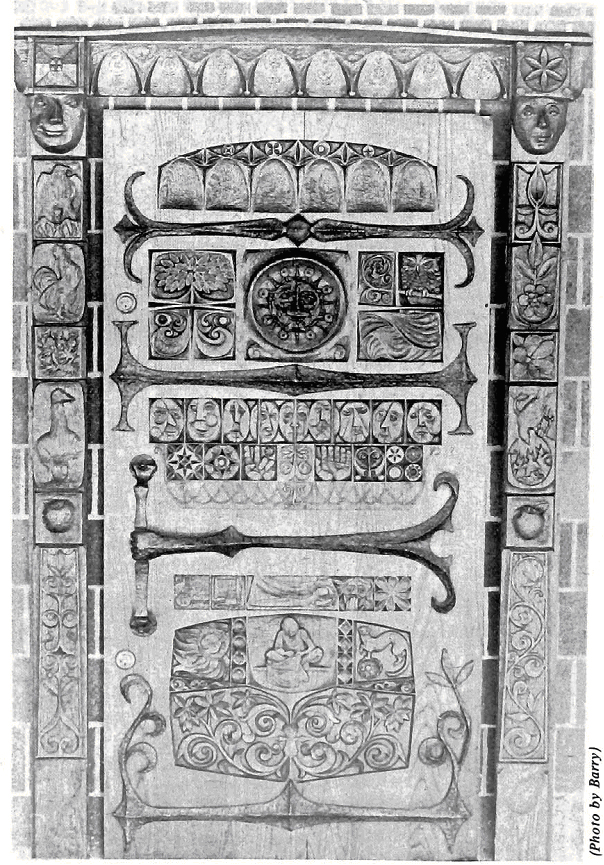 In the lobby of the BAC, one sees various types of art work on display. One such display is a great oak door, owned by Mr. Fred Petters of St. Cloud.

The door originally made the entrance-way to Petters' Fabric Store in St. Cloud, before it closed this summer. On display since January, the door is on loan indefinitely to the College by Mr. Petters.

The door was carved by Mr. Joseph O'Connell, an artist of the St. Cloud area. He and Mr. Petters have enjoyed a long friendship together. When the Petters Fabric Store expanded about 10 years ago, Mr. Petters asked Mr. O'Connell to carve a door for the store.

The door is not an ordinary, plain wooden door. More stands behind it than what was once a fabric store. On it is carved many little figures and designs which open up and designate things of the past to Mr. Petters and his family.

One such figure are the scissors that appear on the door. They symbolize the custom-made scissors of Mr. Petters' grandfather. Another symbol are the two hands - - one has two fingers, the other has six. The amount of fingers stands for the street number of the store, which was 26. Many of the figures are references to the fabric trade, like the needle and thread, implications of sewing. Also, many of the figures are symbols which are private to the Petters family.

The door is of white oak. The iron was welded and forged by O'Connell. It took the artist about a year to complete the project. Mr. O'Connell had a lot of fun with the project, and we can see the result is a pleasant design.

Mr. O'Connell says Fred Petters deserves some of the credit for the door. Mr. Petters made the art possible, he gave encouragement and he allowed Mr. O'Connell the freedom to create as he pleased. "To work for a patron like Fred Petters is a rare thing," said O'Connell.

Joseph O'Connell's art work is not new to CSB. His statue of the Holy Mother is in one of the hallways leading to Mary Commons, his sculpture of St. Benedict appears in the foyer of the BAC auditorium, and his model of a family also appears in the BAC lobby.