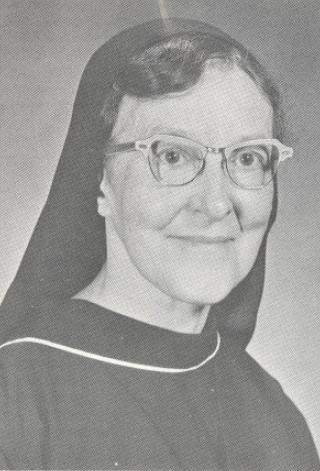 Sister Clement (Victoria) Boehm, 77, died peacefully at St. Scholastica Convent at 2 a.m. on January 19, 1982. She never fully recovered from surgery for cancer in July 1981. Sister was conscious almost to the time of death, praying with the Sisters at her bedside.

Sister Clement was born in Odessa, Russia, on May 7, 1904, the first of four children born to Nicolas and Amalia Boehm. When she was one year old, the family came to the United States and settled in Mandan, North Dakota, where her father was employed as a stonecutter. She became acquainted with Benedictine Sisters in Mandan where she received her first Holy Communion and was confirmed. Sister came to St. Benedict' son May 9, 1920 and received the habit on June 15, 1921. She made first vows on July 11, 1922, life vows in 1925 and celebrated her Golden Jubilee in 1975.

Sister Clement spent most of her religious life as a student and teacher of piano and violin. She attended the College of St. Benedict, the University of Minnesota, and received her bachelor's degree in music from MacPhail School of Music, Minneapolis. Her first assignments were teaching music at Bismarck and Wahpeton, N.D.; and Tacoma, Washington.

After receiving her master's degree from Chicago Musical College, she taught piano for 15 years and for a few years was chairperson of the Music Department at the College of St. Benedict. Later, after postgraduate work at Indiana University, Bloomington, Sister was superior of the Sisters ,organist and music teacher at St. Mary's Cathedral parish, St. Cloud, and in Watkins.

Her second career as teacher of yoga began in the late 1960s. While recuperating from an illness she happened on a yoga instruction book, became interested and applied the instructions to herself. The effect was so gratifying that she continued practicing and was soon teaching Christian yoga as a continuing education course in the College of St. Benedict, at retreat centers and elsewhere in central and southern Minnesota. Her deep sense of the presence of Christ and union with Him was evident in her teaching Sister is survived by one brother, Clem Baime of Madison, Wisconsin. Two brothers, John and Edward Boehm, and one sister, Bernice McCarthy, preceded her in death. Sister's mother died when she was l4; from her father's second marriage she is survived by a brother, Delmar of Denver, Colorado; and a sister, Beverly MacCollum of Pomona, California.

A wake was held at St. Scholastica Convent at 11:30 a.m. and a wake service at St. Benedict's Convent at 5:00 p.m. on Wednesday, January 20. The Mass of Christian Burial was celebrated at 4:00 p.m. on January21. Burial was in the convent cemetery.

Sister Clement is remembered by everyone who knew her for her deep spirituality, her kindness and gracious manner. May Christ's own peace and joy be hers forever!