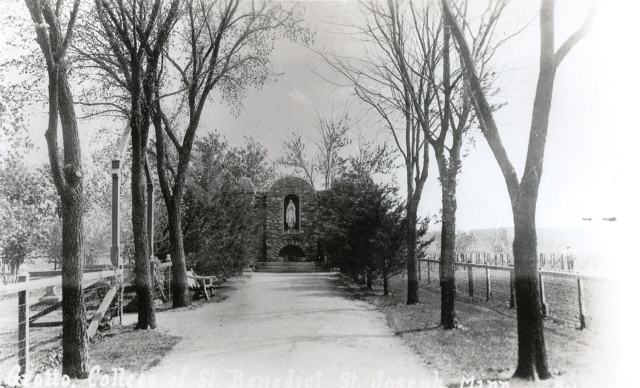 The grotto was constructed at the end of what came to be referred to as the grotto walk. The walk ran along the west end of the St. Joseph parish and the St. Benedict's Monastery cemeteries.

In 1939, the Grotto was redesigned and covered with larger granite rocks. After the redesign, the grotto more closely resembled the site for Our Lady of Lourdes in France, with the grotto itself roughly imitating a cave and a trickling stream. The redesign was complete with a statue of Bernadette.

Sometime after 1960 the statue of Bernadette disappeared. A new statue was  installed during the centennial year, 2010.

In 2005 the grotto underwent repairs. Concrete was added to strengthen the structure. Because of this the stonework can no longer be seen from the back of the grotto.