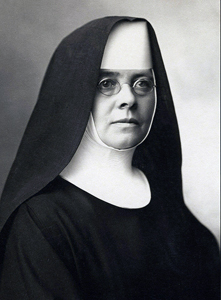 The Kapsner Society recognizes donors who make a cumulative gift of $50,000 and above during the fiscal year (July 1-June 30).

Mother Ceceila Kapsner was elected Mother Prioress on July 27, 1901 and served three consecutive terms as prioress until 1919. During her time as Prioress, there was considerable material expansion, including the building of an infirmary at the Motherhouse (1903), a wing and a laundry (1904-1910) for St. Joseph's Home in St. Cloud, an addition to St. Alexius Hospital in Bismarck, North Dakota (1905), and finally (1914) the Sacred Heart Chapel at the Motherhouse and a new wing for the Main Building for the newly founded Saint Benedict's College in 1913.

Initially the college was founded to further the education of the sisters so that they could better the educational, medical, and other services they provided for the local community. As time went on, Saint Benedict's College (later College of Saint Benedict) served to continue to educate the students of St. Benedict's Academy as well as students from the Midwest region in a Catholic and Benedictine setting. In 1917, the College was accredited by Catholic University as a two-year junior college and was able to issue its first degree.