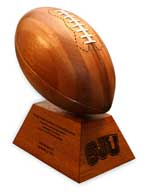 The Bob Basten Excellence in Leadership Award is given annually to a former Johnnie football player who in his life as an alumnus:

Launched in 2009, the award sprung from a conversation among three SJU Class of 1982 friends: Basten, a former Minnesota Viking and business executive who died in 2012 after 10 years with ALS/Lou Gehrig's Disease; Joe Kiley, a Johnnie all-American football player; and Rob Culligan, university vice president for institutional advancement. They wanted to salute Johnnie football players who represent the program's hallmark traits.

Submit your nomination for the Bob Basten Excellence in Leadership Award.