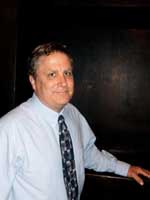 Neal Binsfeld '81 distinguished himself as a Saint John's student-athlete by being named to the all-Minnesota Intercollegiate Athletic Conference three times as a linebacker (1978-80) and three more times as a baseball catcher or designated hitter (1978, '79, '81).

With his wife, Jeanne, Binsfeld has distinguished himself as a dedicated father of eleven children-eight of them adopted. All of their adopted children deal with developmental and/or physical challenges.

In 2004, the Binsfelds partnered with ADOPT US Kids, traveling across the western United States to highlight the need for permanent homes for special needs children waiting for adoptive families.

The Binsfelds have also launched their own non-profit, Creating Connections East2West, collaborating with the Catholic Church in Zanzibar and medical NGOs to help highlight adoption programs.

Binsfeld currently works as a disability coordinator in the Office of Equity and Diversity at the University of Minnesota.

The Basten Excellence in Leadership Award was presented to Binsfeld at halftime of the Homecoming football game Sept. 24, 2011.