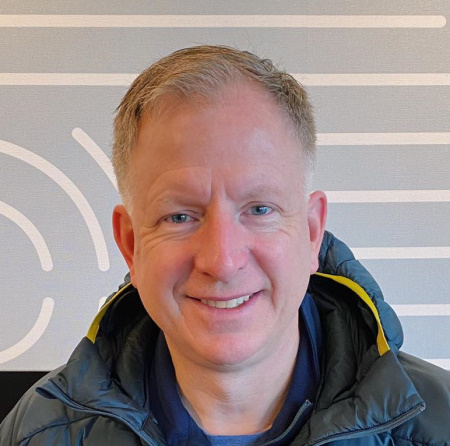 "A desire to identify and fund “transformative changes benefitting mankind.”

That’s the mission of the Richard M. Schulze Family Foundation, established in 2004 by the founder and former chairman of Best Buy Inc.

It’s a desire that perfectly matches the ideals of Mike Zumwinkle ’86, a former    standout running back at Saint John’s who in 2013 left his position at Cargill to take  over as a senior program officer there.

“I’ve been able to come in contact with so many different people from all walks of life who have such truly inspiring stories,” said Zumwinkle of his work. “People who have sacrificed so much to help others. It really continues to inspire my faith in humanity."

It is for his efforts at the foundation and elsewhere that Zumwinkle has been named this year’s recipient of the Bob Basten Award, which is bestowed annually upon a former Johnnie football player who has exhibited outstanding leadership traits, has been involved in his community and with his alma mater, has carried a sense of fair play beyond the football field and has demonstrated an overall commitment to excellence.

It’s named in honor of Basten ’82, who went to training camp with the Minnesota Vikings before embarking on a successful career as a business executive. He died in 2012 after a decade-long battle with ALS/Lou Gehrig’s Disease. Zumwinkle will receive the award at halftime of the Johnnies' game against Gustavus on Oct. 22 at Clemens Stadium.

“All of the things that Bob himself stood for - honor, dignity, selflessness and the ability to see greatness in others can be found in Mike Zumwinkle,” SJU head coach Gary Fasching ’81 said. “Mike is a great Johnnie. He was a tremendous football player who epitomizes the type of player that this program has always produced.

“Mike played with great heart and toughness. He has gone on to do extraordinary things in the community and is the perfect Basten Award winner. As Mike’s former teammate, I applaud Mike for all of his contributions and congratulate him on being the 2022 Bob Basten Award recipient.”

“Mike embodies traits that would make (Basten) proud – a sense of fairness and commitment to excellence,” wrote Stuart Harvey ’83, a former teammate of Zumwinkle’s who nominated him for the award. “He also shares Bob’s trait of humility, always acknowledging and appreciating the efforts of others.”

At the Schulze Foundation, Zumwinkle works to provide financial assistance and support to organizations operating in the areas of social and human services, education and health and medicine.

That includes programs like the Crisis Nursery in Minneapolis, which provides a place of refuge for mothers and children needing refuge from issues like domestic violence, drug and alcohol abuse and homelessness.

It’s one of a number of organizations that Zumwinkle has championed in his work.

“One of the areas we focus on is social and human services which means we’re dealing with some pretty tough issues – chronic homelessness, emergency housing and food insecurity. Those are issues that make for tough calls when it comes to funding decisions. You have to have the ability to be empathetic while not being ruled entirely by your emotions. Mike has the ability to do that. His work ethic is strong enough that he’s willing to do the heavy lifting that’s required to really make a positive difference.

Zumwinkle, a two-time All-MIAC pick whose 2,327 rushing yards still ranks seventh in program history, said he is humbled to have been selected as the winner of this year’s Basten Award.

“I’ve been honored to be part of the football community at Saint John’s,” he said. “You can tell a lot about a person by the kind of company they keep. When you look at the past recipients of this award, what stands out is that they are all such high-quality people. I think a lot of those traits keep getting passed on. So many of the football alumni have been so important in helping me in my career, and I’d like to be another link in that chain.”

His work at the foundation has given Zumwinkle the chance to work closely with Dienhart , who was coaching the Tommies when Zumwinkle was playing for the archrival Johnnies in the mid-1980s. He later worked with Dienhart’s brother during the almost 15 years he spent at Cargill, including over seven as the company’s director of government relations.

“Regrettably yes, I remember Mike as a football player very well,” Dienhart said with a laugh. “It’s funny because when I was coaching at St. Thomas, I can remember my brother asking me why no one could seem to tackle that Zumwinkle guy. Then later he and Mike worked together at Cargill. But I remember Mike as a very good player on a very good team. I never liked hearing his name announced on those afternoons because it usually meant he was scoring touchdowns against us.”

“Mike does most of our work/site visits for homelessness and food insecurity at the foundation,” he continued. “He has the energy and smarts to do the work there, but public funding comes into play too. So Mike’s public affairs background is very helpful.”

After graduating from SJU, Zumwinkle went on to study abroad for a year in the former East Germany, then later worked for over three years as a policy officer with the U.S. State Department.

“The year I spent in East Germany wasn’t an easy experience,” he recalls. “I think during the time I was there I met maybe only five other Americans. So I was forced to learn the language, the way of life and figure things out on my own. But I remember when I was over there, Saint John’s actually flew me back so that I could apply for a Rhodes Scholarship. I ultimately didn’t end up getting it. But I was so amazed at just how many people were willing to go to the mat for me and wanted to help.

“That amount of support really stuck with and inspired me.”

These days, Zumwinkle and his wife Lori, a 1987 graduate of the College of Saint Benedict, live in the Twin Cities where they have raised three daughters, all of whom went on to standout hockey careers. Grace Zumwinkle was a member of the 2022 U.S. Winter Olympic team this past February in Beijing.

“Perseverance and grit,” Zumwinkle said. “I think those are probably the biggest attributes I took away from my time at Saint John’s. There are always obstacles we all have to overcome, but when you surround yourself with good and supportive people, it makes a big difference. It’s an important lesson to learn in life and it’s something that’s clearly evident in the football community at Saint John’s.”