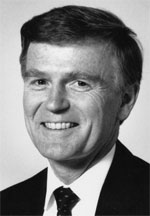 Dr. Bob Gavin '62, received the first Bob Basten Excellence in Leadership Award at halftime of the Homecoming football game on Oct. 3. 2009.  The award is given annually to a former Johnnie football player who in his life as an alumnus has exhibited outstanding leadership traits; involvement in his community and alma mater; a sense of fair play carried beyond the gridiron; and an overall commitment to excellence.

Gavin was dean at Haverford College and president of Macalester College, two of America's leading undergraduate institutions. He also served on the governing board of the Consortium of Liberal Arts Colleges and was interim president of the Science Museum of Minnesota.  Gavin served SJU on the Board of Regents.

The award is named after Bob Basten '82, who played with the Minnesota Vikings until an injury cut short his football career.  He later worked as CEO of American Express Tax and Business Services. He founded UHY Advisors Inc. in Chicago, currently the 15th largest financial services firm in the country.