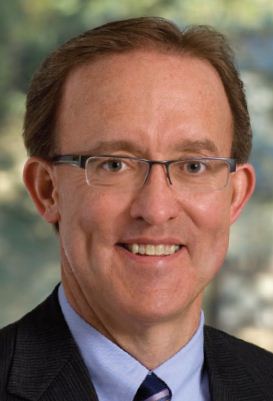 As a first-year student, Jeff Korsmo '80 was an offensive lineman on the 1976 Division III Championship Johnnie football team. Korsmo played for the Johnnies all four years, starting at left tackle as a senior when the team won a four-way share of the MIAC championship.

Since his time at Saint John's, Korsmo has been a leader in health care. He currently serves as CEO of Via Christi Health in Wichita, Kan., a Catholic organization and the largest heath care provider in Kansas. He and his team recently launched a strategic vision of patient-centered, team-based care resulting in the highest quality and value for the patients and communities served by Via Christi.

Prior to joining Via Christi, Korsmo worked at Mayo Clinic in Rochester, Minn. and Jacksonville, Fla., for 28 years. He served in various roles at Mayo including two terms as chief administrative officer, executive director of the Mayo Clinic Health Policy Center and member of the Mayo Clinic Board of Trustees.

Bob Basten and Jeff were teammates, and before Bob passed away in 2012 , he strongly recommended Jeff receive this award that bears his name.