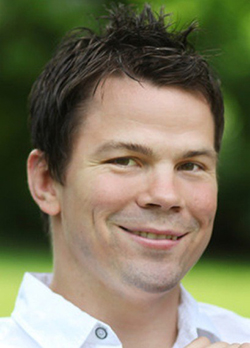 Blake Elliott '03 received the Bob Basten Award at halftime of the Homecoming football game Oct. 4, 2014. The Basten Award honors a former Johnnie football player who has demonstrated outstanding leadership and a commitment to excellence. It is given in honor of the late Bob Basten '82, a former Minnesota Viking and founder of the Playing to Win for Life Foundation for ALS Research.

Elliott's record-breaking SJU football career is unmatched. he received the Gagliardi Trophy and a national championship in 2003. He was a three-time All-American, two-time MIAC Player of the Year and, in 2014, he was placed on the ballot for the College Football Hall of Fame.

Elliott is the co-owner and director of operations at Everyday Living in Eagan, Minn., a foster-care system for adults with special needs. He created the company after his younger brother suffered a traumatic brain injury just before Blake's senior year at SJU. Elliott has served as president of the J-Club and is heavily involved in Feed My Starving Children, a non-profit committed to ending world hunger.